In the mobile and Steam versions, obtaining the first tablet earns the player the achievement "Tablets in the Bag!".

Only the first tablet has to be acquired to beat the game, but it's advisable to get the second and third ones to get Flare, Holy and Meteor. 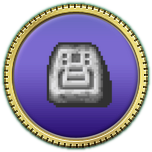