T-Rexaur!!! Squall, be careful! Sometimes it's better to run!

T-Rexaur is an enemy from Final Fantasy VIII. It can be encountered in Balamb Garden training center, in the forests on Balamb island, and on the Island Closest to Hell. If Squall encounters one with Quistis either during the Fire Cavern mission, or during their meeting in the training center after the inauguration ball, Quistis will prompt the player to flee the battle. During the Balamb Garden Revolt T-Rexaurs appear as random encounters around the facility, and in a fixed encounter at the Training Center if the player chooses to defend the kids there from the Garden Faculty.

Alive since the beginning of time, its power and HP are very high. It's better to run if you encounter one.

T-Rexaur possesses incredible Strength and is easily the strongest monster in the Balamb area. On low levels it always starts with its Tail whip attack and this move is used only once during the battle. On mid and high levels T-Rexaur uses this attack freely throughout the battle. It is weak against Ice and the command ability Doom works as well. T-Rexaur is susceptible to Sleep, Darkness and Instant Death. At higher levels, T-Rexaur gains a special bite attack to use against characters who cast magic on it. This counterattack always inflict a critical hit.

If the player successfully uses the Devour command on a T-Rexaur of Level 30 or above, the devourer's Strength stat will be raised by one.

Junctioning Blizzard-type magic to elemental attack helps deal more damage to it, earliest drawn from the Glacial Eye enemies on the Balamb island overworld. (Ifrit is the first Guardian Force who has the Elem-Atk-J support ability learned from the start.) The player can get Sleep spells from the Grats in the Balamb Garden training center, and either cast them outright or junction them to ST-Atk-J to inflict the status with normal attacks. (Siren starts with ST-ATK-J.) The player can then use magic and summons on the T-Rexaur without it waking. Shiva is the best GF to summon against it for its weakness to Ice. Though Shiva's Doom command will work, the counter takes a while to expire and the player may be faster killing it normally. T-Rexaur is susceptible to Death junctioned to Status Attack, which will instantly kill it.

T-Rexaur is a Level 4 Monster Card in Triple Triad used for playing the minigame and for turning into Dino Bone with Quezacotl's Card Mod. It is a good card to collect early on to get Quake spells. 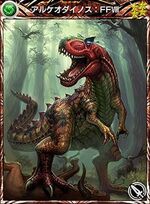 [view · edit · purge]The Tyrannosaurus is a genus of dinosaur that lived during the late Cretaceous period. Its scientific name means "tyrant lizard". The species Tyrannosaurus rex is one of the largest land predators ever known and means "king of the tyrant lizards".

It is known as Archeodinos in the Japanese and German versions, and as Archaeosaur in Record Keeper. [view · edit · purge]The word root archaeo-, as in "archaeology", comes from Greek archaios meaning "ancient". Thus, the creature’s name can be read as “ancient lizard” or “ancient terror”.