Is someone out there? Are they hiding from us?

The Sylph Cave, also known as Sylvan Cave, is a location in Final Fantasy IV and Final Fantasy IV: The After Years. It is located at the northwest corner of the Underworld, and it is the home of the Sylph fairies.

Like the Passage of the Eidolons, the floors of the Sylph cave are Damage floors that can hurt characters as they walk across. As such, Rosa should cast Float each time the party changes floors to avoid this. In Final Fantasy IV: The After Years, the floors no longer damage the party and can be walked on normally and the cave becomes an optional dungeon for the player to visit.

During the story, when Cecil and his friends investigate this cave, they discover that the Sylphs are caring for a wounded man. That man just happens to be Yang Fang Leiden, Cecil's old friend who was presumed dead after the Super Cannon incident. The Sylphs will not let Cecil disturb Yang and when Cecil comes back with a frying pan, he wakes Yang up with it.

Yang insists on helping, but the Sylphs insist that he cannot due to his condition. In return, the Sylphs offer their power to Rydia as a summon. In the 3D remake, Yang will also give the player a certain number of his augments, depending on how many other augments the player gave him while he was still in the party.

By jumping down the hole located in B2, the player must head North and go through the secret passage, to the left to find the room. The teleporter is located on the other side of the room blocked by the trail of treasure chests, and it leads to the Sylphs' Cache.

The cache is located on B3, accessible from the hole in B2, then the teleporter through a secret passage found in the dead-end. The room contains six monsters-in-a-box, and stairs that lead out of the cave.

The Sylph Home is located on the section of B3 accessible from B2. The entrance is still a battle field, and the player is not safe until he reaches inside. Yang and the Sylphs, who look after him and are healing him, are found here.

B2 is accessible from the stairs back from the first floor. If the player has spoken to the Eidolon in the Feymarch and has agreed to play the minigame, an Eidolon will be found in this room, talking to a Sylph. The room also has a set of stairs leading out of the cave.

In the mobile versions of Final Fantasy IV, the player can embark on a quest to find eidolons scattered around the world. The fourth eidolon is inside the Sylph home (the second floor) in the Sylph Cave, and is talking to a Sylph.

The Sylph Cave shares the background music of the Feymarch, "Town of Illusions". 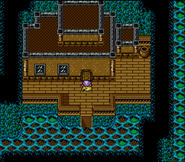 Battle in the Sylph Cave (DS).

Acid in the Sylph Cave (GBA).

Acid in the Sylph Cave (PSP).

Sylph Cave on the world map in Final Fantasy IV: The After Years (Wii).