The Sylphs (シルフ, Shirufu?), also called Silf, are a summon in various games in the Final Fantasy series. They are fairies whose attack, Whispering Wind, absorbs HP from the enemy and gives it to the party. 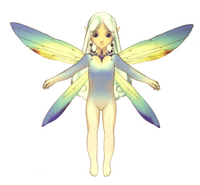 Sylphs, the Fair and Seldseen Fey... Only when they work as one, fitting about on their gossamer wings, is the true wonder of their delicate strength revealed.

The Sylphs live in the Sylph Cave in the Underworld. Cecil Harvey and his friends find them taking care of Yang Fang Leiden, who has been injured due to an attempt to stop the Super Cannon in the Tower of Babil.

The Sylphs do not let the party near Yang, as they do not trust humans. When Cecil comes back with a frying pan given to him by Yang's wife, he hits Yang with it and he wakes up. Yang offers his help, but the Sylphs would not let Yang leave. They offer Rydia their help instead as a summon. Two Sylphs can later be seen during the attack on the Giant of Babil, in a tank with Yang. If the player did not wake Yang, he will still be present during the attack, and the Sylph summon can still be obtained after the Giant of Babil by going to the Sylph Cave and talking to one of the Sylphs there. In the 3D remakes, Sylph is one of the few spells usable by characters that is of the Wind element, the other being Edge's Gale Ninjutsu.

Sylph has a casting time of 1, cost 20 MP (25 MP in the 3D) to summon, their summon spell being Whisperwind, which deals non-elemental (Wind-elemental in 3D) damage to a single enemy, distributing the amount of damage they dealt to the enemies to the party as HP. In the SNES, Easy Type, and Wii versions; there is a glitch that lets the player cast the Sylph summon for 0 MP.

In the Easy Type version, the casting time was reduced to 0.

The field sprite of Sylph.

Summoning the Sylphs in The Complete Collection.

Sylph is a Summon spell for Rydia. It deals moderate non-elemental damage to one enemy and restores HP evenly to all party members at the cost of 20 MP. It is only available during the final battle.

For battle information, see Sylph (The After Years boss)

The Sylphs have fallen under the control of the Mysterious Girl like most of the Eidolons, and a lone Sylph can be found petrified in their cave in Rydia's Tale.

In Yang's Tale, the Sylphs appear to him in a vision at the Impact Crater, warning him of the Mysterious Girl seizing control of them in preparation to take the Crystals, and Yang returns to Fabul to ensure the castle's safety.

In The Crystals, the Sylphs are running about Kaipo and Fabul in search of Yang, and will attack if approached. Reviving Yang and Ursula will calm them down and they will join Rydia as a summon. If the player fights and kills all the Sylphs in Kaipo and Fabul prior to this however, they cannot be obtained.

The Sylphs cost 25 MP to summon and damage a single enemy, while healing the party. The Sylphs also take part in the Sylph Protection Band, formed by Banding Yang's Attack with Rydia's Summon. Rydia summons the Sylphs to empower Yang, healing his HP and granting him the Protect, Shell and Haste statuses for 17 MP.

The Sylphs are a Level 1 summon, and can be purchased in the town of Walse for 350 gil. The attack the Sylph uses is Whisperwind; for the cost of 8 MP, two fairies appear and drain some HP from the enemies, distributing it to the party.

Sylvan spirit for whom the winds are blades.

A diminutive people who dwell deep within the Black Shroud, sylphs resemble delicate dolls wrapped in vibrant leaves.
By and large, these woodland folk hold favorable relations with other races, and have become an almost common sight since a trade in crystals was established. The Garlean invasion of the Black Shroud, however, has quickly soured the sylphs' view of outsiders.

Sylphs are one of the beast races, being numerous around the Eastern Black Shroud and having the best relationship with the city-states of all of them. They resemble plants and have functional wings, using flight as their main form of locomotion and hovering when stationary; Sylphs are always a short distance (comparable to its own height) above the ground. They speak an idiosyncratic form of the common language most notable for its lack of traditional pronouns. Sylphs replace first and third person pronouns with constructions such as "this one" (I/me) or "those ones" (they/them). Second, and sometimes third, person pronouns, as well as names in most contexts, are replaced with similar constructions using adjectives, such as "walking one" for any individual of the player-character races, or "trusted one," "cheerful one," or "nasty ones" for individuals of those descriptions.

They nest in Moonspore Grove, which is blocked off by boulders. The pathways to the Grove have many sylphs that can be engaged in combat, and their houses can be easily seen glowing from tree trunks. A ground structure called the Goldleaf Dais can also be found in this area.

Due to the Garleans' invasion in the Twelveswood and the following Calamity, some sylphs resorted to summoning Ramuh, the lightning-aspected primal. These sylphs have been 'touched', changing to a purple hue, and are fiercely defensive of their territory, only venturing outside to bring back untouched sylphs (which remain a green hue) into their fold. The untouched sylphs have since fled to a village called Little Solace, with the support of Gridania.

Although all feminine in appearance, sylphs are a dual-gendered species whose names reflect their gender. Neither gender falls into what the other races would would label as "male" or "female". Sylphs grow from seeds known as "podlings" formed from the flowers that grow on the heads of adult sylphs. Sylphs whose flowers bloom at specific times during the pollinating seasons produce podlings and their forenames end in ~xio. Sylphs whose flowers bloom at irregular times throughout the seasonal cycle cannot produce podlings and have forenames ending in ~xia. As they do not need to expend their physical and spiritual energies forming a seed, the ~xia sylphs tend to be more adept at wielding magicks.[1]

Wind-up Sylph appears as a minion.

An esper that employs the lingering life force of windswept leaves to silence enemies.

Show us to put our lives back on track! Silf!

Sylph (also called Silf) can be learned by the Summoner job and costs 400 JP. Its attack, Whispering Wind, attempts to inflict Silence on all enemies in a large area. It costs 26 MP and has a speed of 20.

Sylph appears as a boss. 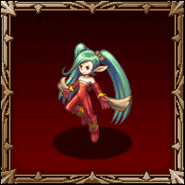 The Sylph is an enemy and also a possible monster that the party's monster unit(s) can transform into.

The Sylph is an enemy and also a possible monster that the party can transform into.

Sylph is the summon able to use their trademark Whispering Wind ability. It costs 12 MP to summon.

This section about Summon magic in Final Fantasy Dimensions is empty or needs to be expanded. You can help the Final Fantasy Wiki by expanding it.

Sylph is a group of wind-elemental Eidolons. There are three versions of Sylph available; two versions available to Morrow, which teach him Aero and Quickspeed abilities respectively, and Aemo's version, which teaches Marching Song abilities.

Sylph appears as a summon. When invoked, she restores a small amount of HP and imbues the party's attacks with the Wind element for 5 turns. As one of the player's two base summons, she cannot break Level 20, being quickly outmoded by Pandemonium as the player advances in rank and story progression.

This gallery is incomplete and requires RW enemy sprite added. You can help the Final Fantasy Wiki by uploading images.

Sylph was set to appear as a Summoning ability. Its animation suggests that their ability would be Whispering Wind which would drain HP from the enemy.[2]

Yang features some Sylphs in his Unique Soul Break, Sylph's Providence. In the update that added Magicite dungeons, Sylph (V) was added as a drop from Tiamat (Savage) along with Tiamat (IX) and Silver Dragon (IX). Sylph's Magicite Ultra Skill deals weak attacks to an enemy, but heals a large amount of HP to all allies, making it a good Main magicite to use if consistent healing is needed.

Sylph is known as the (Tetra Sylphid, [missing rōmaji]?), a group of sylph summoned together as a single-entity esper. They are obtainable from Sylph's Cavern. 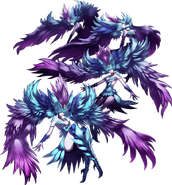 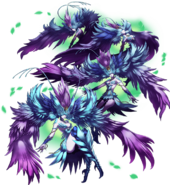 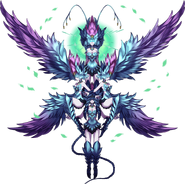 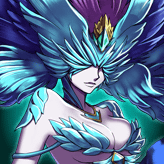 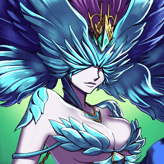 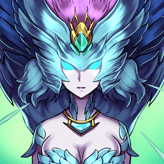 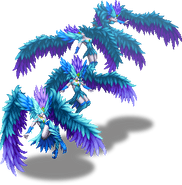 Sylph appears as an obtainable summon known as the Tetra Sylphid, similar to their incarnation in Final Fantasy Brave Exvius. 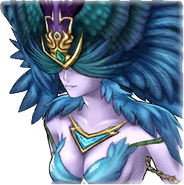 Sylph is a Mirage that can fight alongside Lann and Reynn after her prism is given to them by Serafie. She is a wind-based mirage with the Whisperwind ability, an elemental Drain attack.

A playful air spirit said to rustle leaves in the woods to startle travelers.

Sylph is a wind-element ability card. Her ability is Aero which is a mage ability that allows a single-target wind attack. She produces four earth orbs in battle. She possesses the extra skills Break Exploiter, Elemental Return and Weakness Breaker. Her auto-ability is Break Power Up+3%. She can be obtained from the Ability Card Shop or through Summoning.

Sylph appears as a character.

Sylphs' appears in the background.

This section in Lord of Vermilion II is empty or needs to be expanded. You can help the Final Fantasy Wiki by expanding it.

"Sylph" is a name available for monsters in Final Fantasy XIII-2.