Relm: I couldn't miss the chance to practice my drawing!
This article is in need of a few pictures. Perhaps you can help by uploading a picture of Tiz and Edea as Swordmasters. 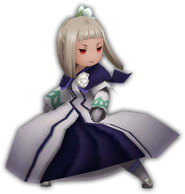 Masters of the blade who use their foes' attacks against them.

The Swordmaster (ソードマスター, Sōdomasutā?) is an asterisk that appears in Bravely Second: End Layer. It is obtained after defeating Nobutsuna Kamiizumi.

The Swordmaster is a physical job focusing on countering enemy attacks, while reducing damage taken with their Bushido. Their innate ability is Counter, allowing them to counterattack when hit by physical attacks.

The Swordmaster's specialty is Counter. Its job command is Bushido.

This gallery is incomplete and requires Tiz and Edea as Swordmasters added. You can help the Final Fantasy Wiki by uploading images.
Bravely Second: End Layer jobs and abilities
Retrieved from "https://finalfantasy.fandom.com/wiki/Swordmaster_(Bravely_Second)?oldid=3245564"
Community content is available under CC-BY-SA unless otherwise noted.