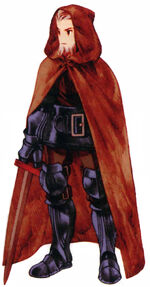 The Sword Saint (剣聖, Kensei?), also known as Holy Swordsman, is a hard-to-obtain job that appears in multiple games in the series.

Sword Saints are seasoned warriors who have trained themselves to become extremely strong physical attackers, with high Strength and Defense, and the ability to wield greatswords. In Final Fantasy Tactics, Sword Saints can use every Swordskill, allowing them to perform powerful magical attacks.

In Final Fantasy XI: Seekers of Adoulin, after defeating Arcus Blades in the level 135 fight in the Epiphany quest, the player is given the title "Sword Saint".

Cidolfus Orlandeau is by default a Sword Saint, and it's implied Barbaneth Beoulve was one as well. Sword Saint is arguably the best class. If equipped with swords or Knight Swords, he can use every Swordskill—the powerful spells cast by Holy Knights, Dark Knights, and Divine Knights. Aside from dealing heavy area-of-effect damage, these skills inflict status such as Silence, restore HP and MP to the caster, or break the victim's equipment.

Frimelda has the title "Blademaster", written with the same characters in Japanese as "Sword Saint".

Sword Saint is an advanced job, earned by leveling Samurai and Mystic Knight both up to 10. It gets a bonus to Attack and Defense with greatswords, Strength and Agility abilities. Like most advanced jobs, it also has the highest amount of experience required to level it up to 20.