Sword Dance is an enemy in Final Fantasy VII. They are fought in Shinra Headquarters and in the fourth round of the Battle Square before the player obtains the Tiny Bronco. They can also be fought during the return to Midgar near the end of the game, but at this point they are harmless. When fought in the Battle Square its stats are enhanced with double the normal HP and its Attack and Magic Attack are increased by 25%.

-Abilities whose names are not shown when used are highlighted in italics.
-*Sword Dance never uses Gash and Spinning Cut.

Despite their bizarre appearance, Sword Dances are actually among the weaker enemies encountered in the Shinra Headquarters. Although Sword Dance has five attacks, it will only ever use three of them under normal circumstances; Sword Dance will never use the moves Gash and Spinning Cut. Bodyblow is its standard physical attack. Its most noteworthy attacks are Sawback, which hits the entire party for minor damage, and Slap, which inflicts damage and may inflict Fury. Both its Bodyblow and Sawback attacks may be twice in one turn.

Sword Dance is one of the few enemies that have weaknesses and resistances to particular Status Attributes. In this case, it is weak to Confusion status abilities, so if attacked with this status ailment, it will take double damage.

Use Bodyblow on random opponent

Use Bodyblow on random opponent

Use Sawback on all opponents

Use Sawback on all opponents

Else If (Count == 3) Then
If (SelectedTarget is alive) Then 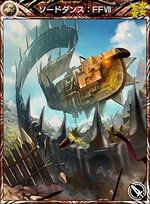 [view · edit · purge]Sword dances are recorded from throughout world history. There are various traditions of solo and mock battle sword dances from Greece, the Middle East, Pakistan, India, China, Korea, England, Scotland and Japan. Many believe that sword dancing evolved from the early Chinese art of wu shu. The simple martial art became a military training technique with swords and spears and then turned into an elaborate acrobatic dance.

Retrieved from "https://finalfantasy.fandom.com/wiki/Sword_Dance_(Final_Fantasy_VII)?oldid=3247171"
Community content is available under CC-BY-SA unless otherwise noted.