The spike protruding from the guard of this knife is designed to catch an enemy's blade.

Swordbreaker is a high-ranked dagger, usable by Locke, Shadow, Strago, Relm, and Gogo. It has an attack power of 164, +30% Evade, enables the Bushido and Runic commands. It can be bought Maranda in the World of Ruin for 16,000 gil, stolen from Amduscias or Vector Chimera, and won in the Dragon's Neck Coliseum by betting the Assassin's Dagger.

The Swordbreaker is the vigil weapon corresponding to the Thief's Mythic Weapon (Vajra), found within Nyzul Isle. It can be used to obtain the weapon skill Mandalic Stab.

The Swordbreaker is the offhand weapon that Larsa wields as a guest party member. It provides 20 Evade, and is not obtainable by normal means.

Knife set with a prong to entangle swords.

Sword Breaker is a high-ranked knife that provides 39 Attack and 2 Evade. It teaches the ability Steal: Weapon for 300 AP, and is obtained as a random reward for completing a mission.

Swordbreaker is a mid-ranked knife, providing 37 Attack and 4 Evade. It teaches the abilities Loot Lv.3 to Thieves for 300 AP and Dagger Toss to Jugglers for 400 AP. It can be bought for 1,900 gil in the shop after creating it in the Bazaar after using a Sturdy Bone, Adamant Alloy, and Moonwood.

Swordbreaker is a level 50 dagger that provides +42 Attack and is bought for 931 gil.

It provides ATK 51 and is strong against Constructs.

It can be bought for 8700g in Burtgang, Matagi, Mysidia, Heliogabalus, Lufenia, and Castle Burtgang (World of Dusk), or found on Mt. Wells.

A dagger from the distant world of Ivalice. Its unique design includes a greatly curved blade and a delicately adorned hilt. In its world of origin, it is said to have been wielded by an heir to the throne of Archadia—a clever young man who sought to set the empire back on a righteous path.

A unique comb-like short sword. As its name would suggest, it was made to break certain weapons, and upon receiving an attack with its ridged side, it can render the attacking weapon powerless. Though produced based on many different fighting styles, this short sword is quite difficult to use, and many are selective when it comes to which hand they use it with. Use of these weapons is usually forbidden in normal combat.

Swordbreaker is a Dagger obtained by finding it at Industrial City Dilmagia and by finding and turning in the Flamering Key found at Magic Library. It provides 43 ATK and +5% physical evasion.

Swordbreaker (FFXII) is a Dagger obtained as the Super Trust Mastery Reward from Ray of Hope Larsa. It provides 93 ATK, 101 DEF, 68 SPR, enables dual-wielding, and increases HP by 20%. 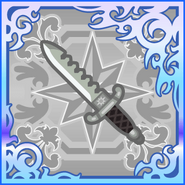 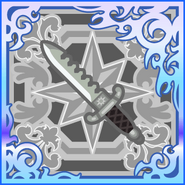 [view · edit · purge]The swordbreaker was a dagger that had large, deep serrations along one side of the blade, resembling the barbed teeth of a comb and designed to entrap an opponent's blade, allowing a variety of follow-up techniques.