No.1 Reactor; Train Graveyard (before Aps is fought); Battle Square (before Tiny Bronco)

The Sweeper is an enemy from Final Fantasy VII encountered in the No. 1 Reactor (the game's opening location), and in the north section of the Train Graveyard soon after. It is also a possible encounter in the second round of the Battle Square before obtaining the Tiny Bronco where it has enhanced stats with double the normal HP and Attack and Magic Attack increased by 25%.

In the 1996 demo version, instead of the Guard Scorpion, a larger-than-usual Sweeper is used. Sweeper does not otherwise appear in this version of the demo.

Sweeper is slightly stronger than the other enemies at the locations it is first encountered, as it will not die in one hit. It shoots from its arm-mounted guns (the attacks Machine Gun and W Machine Gun) or uses gas (Smoke Shot). It will use Machine Gun on the party member with the lowest current HP, W Machine Gun on whoever has the highest current HP, and Smoke Shot on anyone not afflicted with Darkness. Since neither Sweeper, nor any of the opponents it appears alongside with, use attacks that inflict Darkness, this scenario is unnecessary. Its first move is selected randomly, but the Sweeper will cycle through its moves for the rest of the battle. It is weak to Lightning.

Use Machine Gun on random opponent with lowest HP

Use W Machine Gun on random opponent with highest HP 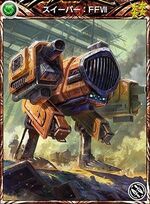 Sweeper appears as an enemy in the Midgar dungeon.[1]