Steiner's other skillset is Swd Mag, usable when he is in the party with Vivi.

Steiner uses is Sword Arts in his spin-off appearances. In Dissidia Final Fantasy Opera Omnia, Steiner's attacks are split with half being based on his Sword Arts, while the other half are based on his Sword Magic. Power Break is Steiner's base ability, inflicting damage while causing a 70% Attack Down on the enemies. Stock Break is his EX ability, which grants a special effect called "Captain of the Knights of Pluto", increasing his own Attack and the entire party's Max Brave cap. 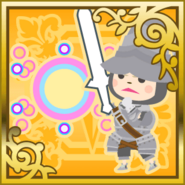