Svarog is an enemy in Final Fantasy XIII found in the Yaschas Massif.

Usually, when fighting a singular opponent, this Wyvern type enemy provides a straightforward battle. However, occasionally, other creatures may be nearby, making this Wyvern tougher to beat. It is weak to Ice and Wind. 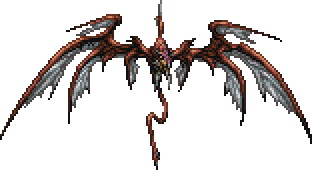 [view · edit · purge]Svarog is a Slavic deity known primarily from the Hypatian Codex, a Slavic translation of the Chronicle of John Malalas. Svarog is there identified with Hephaestus, the god of the blacksmith in ancient Greek religion, and as the father of Dažbog, a Slavic solar deity. On the basis of this text, some researchers conclude that Svarog is the Slavic god of celestial fire and of blacksmithing.

Retrieved from "https://finalfantasy.fandom.com/wiki/Svarog_(Final_Fantasy_XIII)?oldid=3239729"
Community content is available under CC-BY-SA unless otherwise noted.