Leader of the dominion legions and a member of the Consortium of Eight, the commandant is quick to decide and even quicker to anger. His impulsive, explosive nature tends to overwhelm his colleagues, but Dr. Al-Rashia never seems to lose an argument with him. He boasts a long and extensive military career, as well as knowledge of all military matters in the dominion. (He is less proud, however, of his high blood pressure and rapidly receding hairline.)

Suzuhisa Higato, more commonly known as the Commandant, is the leader of Dominion of Rubrum legions and a member of the Consortium of Eight, Rubrum's governing body, representing Central Command that oversees dominion affairs in Final Fantasy Type-0. He gives tasks to Class Zero throughout the game at the Central Command room of Akademeia. 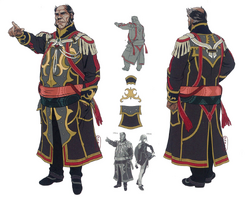 The commandant is 53 years old and a stout balding man with severe features draped in a dominion military uniform. According to the Rubicus, he is 5'6" tall.

The commandant is unrefined, competitive, and hates losing an argument. He is impulsive and begrudges those he feels have wronged him. He is loyal to his nation, as well as the soldiers under his command. He is known for his leadership skills and has had a long career and takes great pride in his accomplishments. He disdains Class Zero under Dr. Arecia Al-Rashia's care whose cadets have stolen the spotlight from his military.

Having exhibited strong leadership skills since his youth, Higato climbed the ranks after joining the military in 809. Three years later he was assigned to Central Command as a military cadet. In 821 he was promoted to major and served as company commander in the 7th Division. Five years later he was promoted to lieutenant colonel and assigned to Central Command as staff officer in the 7th Division.

In 829 he was again promoted, to colonel, and served as regimental commander still in the same division. Two years later he was promoted to major general and served as staff officer at Central Command. Between 835-837 he served as military instructor at Akademeia, the capital and magic academy of Rubrum, and in 839 the previous commandant resigned amid escalating imperial conflict. At 841 Higato was appointed the new commandant and promoted to general.

As the Militesi Empire invades the dominion and attacks Akademeia, they deploy a crystal jammer to cut the dominion forces off the Vermilion Bird Crystal, rendering them vulnerable. In a top secret mission the Sorcery Division's archsorceress Arecia Al-Rashia's hand-reared task force of Agito Cadets is deployed to take the jammer down, as they can wield magic independent of the Crystal. Because the mission is highly classified the commandant only receives information on this on the last minute, and it suddenly becomes pertinent to deliver the cadets a COMM to link them with the Operation HQ.

Arecia asks for a low-ranking dominion legionary Izana Kunagiri to be deployed for the mission, as one of her cadets had specifically asked for him, and Chancellor Khalia Chival VI approves the deployment behind the commandant's back. Izana delivers the COMM, but perishes in the battle.

Class Zero helps liberate Akademeia by destroying the crystal jammer operated by a White Tiger Secundus l'Cie Qun'mi Tru'e, restoring power to the Vermilion Bird Crystal. Afterward news arrives that Lorican Alliance has been obliterated by the empire's weapon of mass destruction, the Ultima Bomb. The Kingdom of Concordia's dragons start defending the kingdom's, as well as the dominion's, airspace, and the consortium rushes into a meeting concerning their next move.

The commandant wants to deploy a Vermilion Bird l'Cie into battle, since Milites has already established precedent on this. The provost reminds him that l'Cie only heed the call of the Crystal, although the commandant argues aiding in the war effort would be in the Crystal's interests.

Arecia's cadets liberating Akademeia impresses the administration to such extent they are officially enrolled to the academy as Class Zero. It is decided Akademeia's Agito Cadets are to be deployed to war and thus come under Central Command's jurisdiction. In the provost's eyes, assigning the cadets to the charge of the dominion legions and sending them off to war with other nations is a broad interpretation of their role in "defending the Vermilion Peristylium." However, the chancellor declares the dominion—and, by association, the peristylium—to be in a state of emergency. Thus, with the consortium's approval, the cadets are organized into military units and cast into the flames of war.

Upon discovering Izana's fate the commandant confronts Arecia, saying she had no authority to deploy one of his legionaries, especially for such a fickle reason as a cadet's request. He claims her recklessness got Izana killed, as there would have been more accomplished scouts available, but Arecia rebuffs him and says she had the chancellor's support.

The commandant harbors ill will toward Class Zero that has taken the spotlight as the saviors of the dominion. He considers Arecia having too much power within the consortium and wants to remove her influence from Akademeia. He sends the cadets to a task to fell imperial soldiers in Northern Togoreth Region, and is annoyed when they return unharmed. Declining his requests leads him to suggest the cadets should be charged with insubordination. His surprise at Class Zero returning after accepting and completing said tasks leads one to believe his requests are not supposed to be completed, and that he gives the tasks under the assumption Class Zero would die attempting them, thus discrediting Arecia.

Class Zero is sent to infiltrate the imperial magitek factory to sabotage their newest project, and though the cadets succeed they are nearly wiped out by the White Tiger Crystal's Primus l'Cie, Nimbus. During their battle news of an armistice spread and the cadets are rescued. The commandant travels to the Militesi capital of Ingram and asks to speak with one of Class Zero's newest recruits, Machina Kunagiri, alone.

The commandant jogs Machina's memory of his late brother Izana, and claims Arecia and the rest of Class Zero are responsible for his death, as they had had Izana's mission changed during the liberation campaign. The commandant claims Machina was transferred to Class Zero to report on their and Arecia's actions. Though offered a chance to leave due to personal reasons with another new recruit to the class, Rem Tokimiya, as a back up, Machina refuses to defer the job to her and agrees to report anything he finds out. He swears in Izana's name to become stronger than Class Zero and to protect Rem at all cost.

Unknown to Machina this was the reason he was promoted to Class Zero: To exploit his fear of being powerless to save people he was made to see how weak he is in comparison to his classmates. The commandant wants to use Machina to bring about Arecia's downfall, and uses the threat of leaving Rem alone should Machina fail in his espionage, knowing Machina would do anything for her.

During the peace talks Queen Andoria is assassinated and the blame is placed on Class Zero and the dominion for their supposed dissatisfaction with the truce conditions. As the chancellor and his entourage, presumably including the commandant, return to Akademeia post-haste as the war is to commence immediately, Class Zero is left behind and must escape Ingram with their lives while unable to contact the dominion.

The Kingdom of Concordia allies with the empire and the coalition begins a military campaign to lay waste to Rubrum. Back in Akademeia the commandant discusses the situation with the Consortium of Eight, all members finding the accusations of the dominion having been behind the assassination preposterous. The commandant wonders where Class Zero—the ones claimed as the true culprits—was during the incident, and claims that if the cadets had stood trial before a tribunal, the mess could have been avoided, and thus the turn of events can be pinned on the cadets. Arecia finds this ridiculous, receiving the commandant's wrath when she speaks up.

The chancellor brings up the Vermilion Bird Secundus l'Cie Lady Caetuna who wants to use Verboten Eidolon against the Militesi-Concordian coalition lest they try to invade Rubrum. The commandant is shocked she would help them.

In truth, it was the commandant who had wanted to abandon Class Zero to imperial territory. When their commanding officer, Kurasame Susaya, organizes a rescue mission, it angers the commandant who assigns him a mission requiring Kurasame to return to the battlefield in what is considered a suicide mission. Though the commandant states that good results would clear Class Zero's name, it is suggested Kurasame is aware the Akademeia officials regard both him and Class Zero as expendable. Regardless, he accepts the mission.

The commissar, knowing what Higato is about to do, asks the commandant to keep both herself and the chancellor out of his schemes. The sending of Kurasame to fight on the frontlines and support Caetuna in the Clash on Big Bridge shows a lack of compassion and disregard for life for those the commandant dislikes.

The tide of battle turned, the dominion conquers all of Orience and Tempus Finis commences. When Class Zero returns to Akademeia they find it in disarray with the dominion commanders, Higato among them, gone. In the bad ending, his corpse can be found while fighting the endless Rursus army.