Suzaku (朱雀, Suzaku?) is a recurring weapon in the Final Fantasy series. 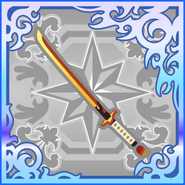 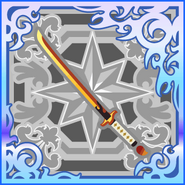 [view · edit · purge]The Vermilion Bird is one of the Four Symbols of the Chinese constellations. According to Wu Xing, the Taoist five-elemental system, it represents the fire-element, the direction south, and the season summer, correspondingly. Thus it is sometimes called the Vermilion Bird of the South.

It is known as Zhuque (Joo-choo-eh) in Chinese, Suzaku in Japanese, Jujak in Korean, and Chu Tước in Vietnamese. It is described as a red bird that resembles a pheasant (also dubbed as either a sparrow or a peafowl) with a five-colored plumage and is perpetually covered in flames, though it is not to be confused for a phoenix.