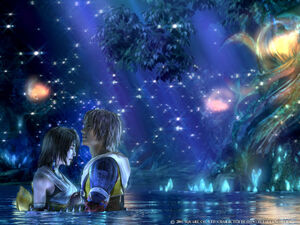 Every time I finish recording a theme song, I first have my wife listen to it. She gave high marks to all the previous songs, but she didn't really care for 'Suteki da ne.' I lost a little confidence then; but once the song was released, it made the top ten on the Japanese charts, so I'm relieved.

"SUTEKI DA NE (Isn't It Wonderful?)" (素敵だね, Suteki da ne?, lit. Isn't It Wonderful?) is the song used as the romantic theme in Final Fantasy X. It was composed by Nobuo Uematsu and arranged by Shirō Hamaguchi. The lyrics were written by Kazushige Nojima and it was sung by RIKKI.

The "Beyond Final Fantasy" feature included with the Final Fantasy X International and PAL versions has a music video of the song.

Uematsu initially had difficulty composing the theme song for Final Fantasy X, even after finding the perfect singer. In the "Beyond Final Fantasy" feature, Uematsu explains the way he went about composing "Suteki Da Ne":

Regarding the theme song, my first concern was to find someone to sing it. The Asian-inspired theme had nothing to do with the choice, but since I was personally interested in Okinawan music my staff and I looked at various CDs of that particular region. That's when one staff member found some CDs by Rikki. I had never heard a voice quite like hers and I contacted her immediately. After that, I had the chance to visit her hometown of Amami Ooshima and meet her several times. I had a certain image for the song in mind, but it was difficult to complete. The deadline was fast approaching so I tried changing my work environment to finish the song. I took the synthesizer from my office and brought it into the reception room. After the girls at the front desk left for the day I sat there alone through the night composing my songs. After this switch I was able to compose nearly ten songs in an hour. Any of them could have been used but I took the one I considered best for the theme. I completed the melody first so I had Nojima write the lyrics afterwards. We both celebrated the night it was completed.

The standard version does not have the lyrics in italics, which appear in the orchestra version.

The moon is shaking in the mirror
As my heart trembles
The stars are flowing,
And soft tears are spilling

The moon blurs the mirror
As my heart flows through
The stars shake, and tears spill,
Tears I can't hide

Isn't it wonderful
if we could just take each other's hand and walk?
I want to go
to your city, your home, in your arms

"Suteki Da Ne (Isn't It Wonderful?)" plays during the romantic scene between Tidus and Yuna at the Macalania Spring after the party escapes Bevelle. Effort was put into the scene with Tidus and Yuna at the springs as it was the climax of Yuna's journey, when she would decide to brave death and continue her pilgrimage regardless of all that had happened. Scenario Writer Kazushige Nojima originally wrote the scene differently, with Yuna subtly objecting whenever Tidus tried to turn the conversation positive, with him eventually stopping her by kissing her. Assistant writer Daisuke Watanabe changed it to the final version, where Yuna first enthusiastically goes along with Tidus's ideal for them to live carefree, and then falls sad upon realizing it is a dream that is out of reach, and Tidus soothes her.[1]

Both "Yuna's Theme" and "A Fleeting Dream" play in the game's original versions (including in the remaster) during scenes in Final Fantasy X: Eternal Calm.

"A Fleeting Dream" is included in the music player as the third track of Memories of FFX album bought from the Wiz Chocobo Post for 100 gil.

The Dissidia 012 Final Fantasy arrangement of "Yuna's Theme" is available on the Memories of Dissidia 012 FF album purchasable from Old Lestallum for 500 gil.

"A Fleeting Dream" is a bonus battle track purchasable in the PP Catalog and it also appears as the name of Tidus's second alternate outfit name.

An arrangement of "Yuna's Theme" by Takeharu Ishimoto serves as the world map theme for Yuna in her chapter in the Treachery of the Gods scenario.

"Suteki Da Ne (Isn't It Wonderful?)" appears as a Event Music Sequence. It was released as a sample demo before the game's full release.[2] "A Fleeting Dream" appears as a downloadable Field Music Sequence track, depicting the ruins of Zanarkand in the background.

"A Fleeting Dream" appears as a playable Field Music Sequence available by default.

"Suteki da ne" is the title of a UR-ranked Vision Card, obtainable during the Final Fantasy X crossover campaign. The face of the card depicts the date scene as in its source material. The card itself grants bonuses to Water-aspected units when equipped by those selfsame units.

The album includes a piano version of the theme, arranged by Masashi Hamauzu and performed by Aki Kuroda.

The repertoire of the Distant Worlds II: Music from Final Fantasy concert series includes the song, performed in English by Susan Calloway on the album's studio recording. The lyrics were translated into English by Eric Roth and Kanako Böcker, assisted by Arnie Roth and Nobuo Uematsu.

Wind, and my heart swimming in collected words
Moved by the wind, in through the world.
Clouds, like a voice that we all recognize
Carry the holding future.

Moon, on the sky as a trembling heart
Shown on the glass unsteadily.
Stars, shedding tears in an overflowing stream
I see the night all around me.

That soul
Inside your body
From those conflicted nights
As from my dreams.

Wind died away, and I feel all the words
Led by a gentle illusion.
Clouds are the future that cannot be attained
Told from impossible distance.

The moon filled with night as it flowed through your heart
Such faraway reflections.
Stars, ripe like tears, like fruit falls from a tree
I wipe my dreams off the nighttime.

To feel your face
The touch of memory
And now that I awake
As from a dream.

"Suteki da ne", arranged by SmileR and featuring Miina from Sayonara Ponytail, is a track on this arrangement album with music arranged to sound like music that would play in a cafe.

The album includes the song, performed live by RIKKI and the Tokyo Philharmonic Orchestra.

The album includes the song, performed live by RIKKI and The World Festival Symphony Orchestra.

"Suteki da ne" was performed live during the concert by RIKKI and the Prima Vista Philharmonic Orchestra.

It was also recorded and released in the album.

A piano arrangement of "Suteki da ne" by Roger Wanamo was performed as an encore by Katharina Treutler for the concert series. It was recorded on Final Symphony - music from Final Fantasy VI, VII and X.

A rearranged version of "Suteki da ne" appears as the fourth track on this album.[3]

The music video has a slightly different violin solo than the version featured in the game.