Susanoo is a water-elemental Eidolon that appears in Final Fantasy Dimensions II. The signet can be obtained for Parai to equip as the first-time completion reward for the "Alba: Act 1" side quest in Present Navos Forest. The Susanoo signet provides average boosts to HP and attack, but provides subpar boosts for other stats.

In the original free-to-play versions of the game, Susanoo was a water-elemental signet that could only be obtained through the game's summon draw shop. However, he taught the Ame-no-Murakumo ability instead of the Shock ability. In the premium versions of the game, Susanoo's Ame-no-Murakumo abilities were removed from the game and replaced with the Shock ability from the Ark summon. Susanoo was an SS rank summon and could be equipped by any party member.

The Susanoo summon is based on the Shinto god of the same name. His official description describes him as the Eidolon of the Great Sea. Susanoo is depicted as a massive humanoid bear and wields his treasured sword, the Ame-no-Murakumo.

Susanoo's special attack is Life Tremor, which hastens the next action to all party members and delays the next action for all enemies. Summoning the Susanoo costs 1 bar from the Summon Gauge.

The following are the abilities Parai can learn from Susanoo: 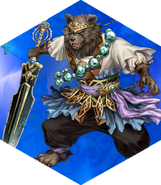 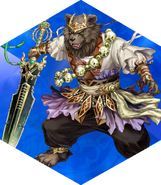 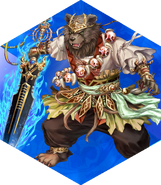 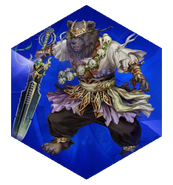 Susanoo's Ame-no-Murakumo ability from the free-to-play versions gets its name from "Ame no Murakumo", or the Kusanagi-no-Tsurugi sword, of Japanese myth. It was originally called Ame-no-Murakumo-no-Tsurugi (天叢雲剣?) which roughly translates as "Sword of the Gathering Clouds of Heaven", but its name was later changed to the more popular Kusanagi-no-Tsurugi ("Grass Cutting Sword"). In legend, the sword is found by the storm god Susano'o in one of the tails of the Yamata no Orochi. It's also one of the three Imperial Regalia used in the ritual of imperial ascension.