Supreme Gem (至高の魔石, Shikō no Maseki?, lit. Supreme Magicite) is a recurring item in the series.

Supreme Gem is an item that casts Ultima when used during battle. When 99 are used on an aeon, it teaches them the Ultima spell, and when four are used for customizing a weapon, it can teach either Magic +20% or Strength +20%. It can be stolen from Left Fin, Seymour Omnis, and Sin, dropped from Jormungand, or bribed from Halma.

Supreme Gem is an item that casts Ultima when used as an item during battle, and teaches any creature Ultima when using 60 of them on the creature. It can be obtained from Paragon as a common drop, Elma in the Fiend Arena as a rare drop, or Chac by way of a 1,751,400 gil bribe (1,838,972 gil for Oversoul).

Supreme Gem is also used as an enemy ability by Buddy, Elma, and Yaibal when fighting them in the Fiend Arena. It inflicts 2,343~2,646 damage to the party that cannot be reduced by any means.

Supreme Gem is an A-Rank accessory that provides +4 Luck. It can be obtained from the Duel Colosseum's Lunar Whale course or from the shop by trading 2,000 gil and Megalixir x2. 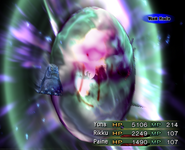