Super NES
Super Mario RPG: Legend of the Seven Stars is an RPG released on the SNES. It is a spin-off to the Mario series of 2D platform games, with various Mario characters and concepts adapted to the RPG genre. Super Mario RPG was developed by Squaresoft, and features similar gameplay and story elements to the Final Fantasy series.

Super Mario RPG uses turn-based RPG gameplay. Characters use normal attacks, special attacks, items, and defend commands, each tied to one of the four main SNES controller buttons. Characters can each equip a weapon, a piece of armor, and an accessory. As the player defeats enemies, characters level up, gain stats, and learn new special attacks. Special attacks consume Flower Points (FP), similar to MP. Three party members enter battle at a time, the player swapping out characters between fights, but Mario must always be in the party. The characters each have abilities and stat distributions based on Final Fantasy jobs; Mallow for example is similar to a Black Mage, with low physical stats and HP but powerful elemental magic.

Outside of combat the game is a 2.5 isometric format with platforming elements. It has many jumping puzzles, including navigating moving platforms and leaping around stage elements to access new areas. Enemies are visible and engage Mario when touched. Numerous minigames and puzzles are also present.

Mario's day starts out entirely routine: Princess Toadstool is visiting and playing in the garden, when Bowser swoops by and kidnaps her. Mario wastes no time in rushing to Bowser's Keep to defeat Bowser and save Toadstool, when an earthquake strikes the keep and a gigantic sword smashes into it, scattering the three. Mario returns to the keep where the sword informs him the castle is now under the control of the "Smithy Gang", and the sword collapses the bridge to the keep to deny Mario access.

Mario goes to the Mushroom Kingdom to inform the Chancellor what has happened, and shortly after helps a young tadpole named Mallow chase down a thief named Croco that had mugged him. When Mario returns to the Mushroom Kingdom, the town has been overrun with creatures on pogo sticks called "Shysters", and a sentient dagger named Mack has taken over the castle. Mario defeats Mack and finds a mysterious floating star in the throne room. Unsure of what this all means, Mario accepts Mallow's suggestion to go to Tadpole Pond and ask for advice from Mallow's grandfather, Frogfucious.

Frogfucious reveals that Toadstool and Bowser are no longer at the keep, and that the Smithy Gang that has taken control of Bowser's Keep is sending minions out to wreak havoc on the world; Mack was just the first of their number. Frogfucious also reveals Mallow is not really a tadpole, but a creature he found in a basket drifting down from the falls whom he adopted as his grandson. Frogfucious directs Mario to nearby Rose Town, where the residents are being plagued by paralyzing arrows shooting out of the nearby forest. When Mario stays the night he dreams of the innkeeper's doll, Geno, growing to life size and leaving. In the morning, the innkeeper's son claims he saw Geno walking into the forest, and the doll is gone.

In the forest Mario finds a giant bow named Bowyer is the one attacking the town, and one of Bowyer's minions arrives with another star. The life-size Geno doll arrives to engage Bowyer, and Mario and Mallow intervene to help. When Bowyer is defeated, Geno explains he is an emissary of the "Star Road", a location in the sky. Every time someone in the world makes a wish, it falls from the Star Road as a shooting star when it is granted. Smithy's entrance into Mario's world shattered the Star Road, and the stars Mario is finding are fragments needed to repair it, Star Pieces, with seven in all. Geno has taken residence in the doll's body to search for the stars, and says that until the Star Road is fixed, wishes cannot come true in this world. A surviving minion of Bowyer hears this and rushes to tell Smithy.

After a stop-over in Moleville to retrieve the third Star Piece, Mario finds Booster's Tower, where Toadstool fell and is being held hostage by Booster, who intends to marry her. Mario also finds Bowser here, along with his troops who have abandoned him due to failed attempts to retake his castle. Bowser joins Mario and the group scales the tower, pursuing Booster to Marrymore to rescue Toadstool. Though she initially returns to the Mushroom Kingdom, she shortly sneaks out, insistent on helping Mario now that she knows what's at stake. The group continues to Star Hill, where stars dropped from the Star Road fall, and find the fourth Star Piece.

In Seaside Town, the elder of the town tells Mario a star fell into the ocean near a sunken ship. The ship is occupied by the shark-man pirate Johnny Jones and his crew. Mario and company explore the ship and defeat Johnny, who hands over the star as spoils of victory. However, when they return to Seaside Town they find the elder and the town's inhabitants are fakes, and collectively are a member of the Smithy Gang, Yaridovich. Mario hands over the star in exchange for the safety of the real townsfolk, but Johnny Jones arrives to prevent Yaridovich's escape. The fragments of Yaridovich merge to reveal their true form, a spear-wielding monster, and are defeated.

With five stars, Mario and the group journey to Monstro Town, a town of reformed monsters at the edge of the known world that is said to have a star there. However, they only find a "pop star" starfish. The leader of the town surmises that if the star isn't here, the only place left to search is in the sky. At Bean Valley a giant beanstalk allows passage to Nimbus Land, a city in the clouds. Mallow finds he is actually the prince of the kingdom, and his parents are being held captive by Queen Valentina to take over the kingdom. The group defeats Valentina and sends her fleeing, and Mallow's parents say they saw a star crash into the nearby Barrel Volcano.

Mario's group enters the volcano and finds the sixth Star Piece, but it is stolen by the Axem Rangers, members of Smithy's gang. They flee to their airship, the Blade, but Mario leaps onboard and engages them, destroying the airship and retrieving the star. Returning to Mallow's parents, they all agree that the only place left they haven't searched for the seventh star is Bowser's Keep. Mallow's parents provide transportation to the keep, and Mario and his allies fight their way to the keep's towers to engage the giant sword, named Exor. When defeated, Exor's mouth opens and draws Mario and his allies into another world.

Geno surmises that Exor was merely the portal for Smithy's minions to cross over from their home world, a gloomy and dark factory. The five fight their way through the factory and find Smithy at the end of an assembly line, manufacturing a new series of minions for a full-scale invasion of the Mushroom Kingdom; Smithy is also wearing the last Star Piece around his neck. After a long and difficult battle, Mario and his friends destroy Smithy, and Geno returns to the Star Road with the Star Pieces, leaving the doll's body behind. Exor and the portal to Smithy's world crumble, and the world celebrates and begins to rebuild from Smithy's invasion.

The game takes many cues from the Final Fantasy series: the equipment system, special attacks, turn-based battle system, and general plot of gathering Star Pieces to save the world are reminiscent of Final Fantasy gameplay and story conventions. Mario and his allies are roughly based on traditional Final Fantasy jobs, while Smithy and his minions wield weapon types commonly found in the series. 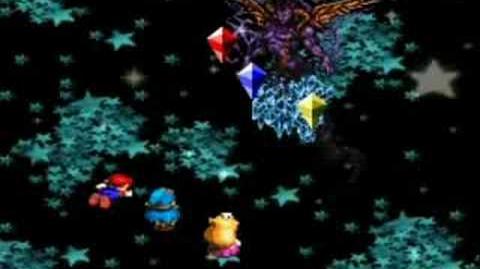 The strongest connection to the Final Fantasy series is the optional boss Culex (Crystaller in the Japanese version). In Monstro Town, a sealed door opens to reveal a strange vortex, as well as an entity known as Culex. Depending on the version, Culex's motives vary. Before he departs and closes the portal, Culex asks for a duel with the party. Culex attacks with four elemental Crystals, and instead of the game's usual 2.5D isometric sprites, they use static sprites that hover in place, more similar to Final Fantasy's sprite-based art style in the Super NES era. The battle music is a remix of the Final Fantasy IV boss theme (despite him actually being from an earlier game of the franchise), the victory theme is Final Fantasy's Victory Fanfare, and after the battle "Prelude" plays. After losing Culex hands Mario the Quartz Charm accessory (Crystal Charm in the Japanese version) and departs, vowing that they might become friends in another timeline (overseas version), or expressing satisfaction in learning more and implying that he'll return when he masters this new power (Japanese version). Mario appears back in Monstro Town with the mysterious door gone.

The dialogue is different between the Japanese and English versions. In the overseas version, Culex introduces himself as a resident of another world, known as Vanda, interested in invading Mario's world, identifying himself as a Dark Knight for the Dark Mage, but Mario's world is uninhabitable for Culex and his kind. In the Japanese version, he is the incarnation of all the evil in his home realm, and intends to investigate Mario's world due to it containing power that he cannot comprehend and wishes to learn more from Mario and his party. The Japanese version even makes light of how Crystaller does not comprehend "the power of the third dimension" that he finds himself in (as Super Mario RPG is rendered in an isometric format, whereas the Final Fantasy titles prior to this game were in 2D). Culex's name, job title, and to a lesser extent the name of the realm he hails from in the overseas versions refer to Golbez (whose Japanese name alludes to the Golubac Fly), as Culex's name derives from a type of mosquito that dwells in orchards: Vanda.

The Japanese version also alludes to major Final Fantasy villains. In Dr. Topper's quiz segment in Bowser's Castle nearing the end of the game, Exdeath and Kefka Palazzo can be given as incorrect answers to the questions "What's the first monster you see in the Pipe Vault?" and "Who is the ultimate enemy in this adventure?", respectively. In the localized version these answers are changed to Chompweed and Goomba, respectively.