The Sunken Shrine is a location in the original Final Fantasy situated undersea just off Onrac, and is accessible by a barrel found on Onrac's dock. The Water Crystal lies here.

The Sunken Shrine is a more difficult dungeon to navigate than the other abodes of the previous Fiends of Element. Several floors have multiple staircases, some of which may lead to dead ends. One chain of staircases leads to a floor that is enemy-free and inhabited by mermaids whom the player must visit to proceed. The player can talk to them to learn of the Kraken's siege on their home, and many of their rooms contain treasure chests with valuable equipment.

Nearly all of the monsters in the Sunken Shrine are Water-based, so the Coral Sword, the Gauntlets and Thunder magic are valuable.

Despite the dungeon's late appearance it is considered one of the easier dungeons; the only enemies who present a threat are the Cockatrices and Pyrolisks. None of the enemies beyond them are threatening, especially compared to how powerful the party is likely to be when they get here; the only threat is the sheer size of the dungeon, which can strain the party's resources if the player attempts to do the entire dungeon in one go (which is unnecessary, as Onrac is available for resupply).

After obtaining the Oxyale from the fairy at the spring in Gaia, the Warriors of Light meet again with the woman at the docks of Onrac. She shows her true from, one of a mermaid, and jumps to the water, leaving a submersible barrel on the port. The Warriors of Light use the barrel to descend to the Sunken Shrine and search for the Kraken. They defeat it, and restore the Water Crystal.

Later, when searching for the Wind Crystal, the Warriors of Light find the Rosetta Stone on the upper floors of the shrine inhabited by Mermaids.

Chaos's seat of power, the Edge of Madness, exists on a floating island with a volcano off the coast of Onrac, above the approximate location where the Sunken Shrine would be. The "Edge of Discord" gateway is here and it is the final destination of the Light to All and Confessions of the Creator storylines, where the player faces Chaos and Feral Chaos, respectively.

Report 12 is titled "Hill with View of the Water Temple", implying that the floating island is where Garland met Chaos, Cosmos, and Cid after being summoned to World B.

In the Dragon Caves, the party faces Bahamut, the Dragon King, who tells them they must bring proof of their courage from the Citadel of Trials.

"Chaos Shrine" is the background music of this area. 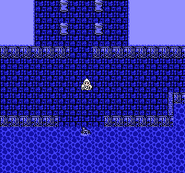 Sunken Shrine as seen from the barrel (GBA).

The Water Crystal at the Sunken Shrine (PSP).