The Sunken Cave, also known as Underwater Cave, is an optional dungeon in Final Fantasy III. It is located underwater, beneath the small island to the extreme southeast of the Surface World, so the party will need the Nautilus that can use its feature to dive into the underwater surface. The Sunken Cave has a wealth of chests containing lots of equipment and a few items. At the end, there is a mass of rock and bridge that may hint that there was much more of the cave previously.

There are four chests in a hidden room that are traps. The player must fight the monsters guarding the chests in order to obtain the items inside.

The background music that plays inside the Sunken Cave is called "Sunken Temple". 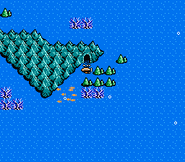