The power of the sun nurtures life, yet through this blade, it harvests it.

The Sun Blade (サンブレード, Sanburēdo?), also called Sun, is a recurring weapon in the series. It is often a mid-ranked sword with no special abilities.

A sword effective against undead.

The Sun Blade originally appeared as a high-ranked sword, usable by Warriors, Knights, Red Mages, Red Wizards, and Ninjas. It deals increased damage when used against the undead and has an Attack power of 32 and Accuracy of 30. It is found as a treasure in the Mirage Tower.

A sword touched by the grace of the sun.

The Sun Blade is a high-ranked sword that can be found in Castle Palamecia and dropped by Black Knight, and Catoblepas. It provides 83 Attack, 65% Accuracy, and 2% Evasion.

Sunblade is a Greatsword usable at level 75 by Paladins and Dark Knights. It has damage 70 and delay 466. It is obtained via Trial of the Magians, by upgrading a Break Blade by defeating Bloodpool Vorax 3 times with the Break Blade equipped (this is trial 216).

On the other hand, if the player completes trial 224 (defeat 400 experience-yielding plantoid monsters with Sunblade equipped) instead of trial 219, Sunblade will become a Salamand Sword instead; this can eventually be upgraded to the multi-attacking Fulgurante.

Blade said to hold the power of the sun itself.

The Sun Blade is a mid-ranked blade that provides 37 Attack and 2 Speed. It can be bought from Sprohm and Cyril for 2,400 gil and from any other town for 2,700 gil.

The Sun Blade is a low-ranked blade that provides 33 Attack and 2 Speed, and teaches Blitz to Gladiators and Fighters for 250 AP. It can be bought for 480 gil in the shop after creating it in the Bazaar after using a Soul Ceffyl, Cruzle Brass, and Bomb Shell. It is also sometimes a reward for completing a mission without breaking the Law.

Sun has a sword icon before its name. It can be bought in Base Town for 67,980 GP. It has 50 uses and an attack power of 13, the damage formula for Sun is base on Strength. This weapon is effective against undead-type enemies.

Sun has a sword icon before its name. It can be found in Nasty Dungeon and Valhalla Palace. It has 40 use, it also increases a Robot's HP by 144 and increases their Str by 32. The damage formula for Sun is the user's Str x15. It is also effective against undead such as Skeleton, Zombie, and O-Bake.

Sun has a sword icon before its name. It has an attack power of 90 and it can be found in the Cave near Talonsburg in Pureland. It also increases Cyborg's HP by 120.

The Sunblade is one of the two weakest swords, granting +4 Attack and Initial Bravery +20%. It can be obtained from the shop shop by trading 1,000 gil, a Broadsword, Bless Shard, and Transmogridust x2, or found in a chest in Destiny Odyssey VIII-4.

The Sun Blade grants +29 Attack and Initial Bravery +20% and having a level requirement of 30. It can be obtained from the shop by trading a Broadsword, Rusted Metal, and 24,600 gil.

The Sun Blade is one of the Warrior of Light's unlockable weapons, alongside the Diamond Shield. It can only be obtained by purchasing it as DLC from the Playstation Store. Like all other characters' weapons, equipping them offers no advantages or disadvantages.

The Sun Blade is present as a weapon.

Be friendly to the environment as you fell foes with this solar-powered sword.

A greatsword from a faraway world. This sword deals even greater damage when attacking undead monsters. It can be obtained from a treasure chest in Castle Palamecia or by defeating the imperial cavalry that reside within. 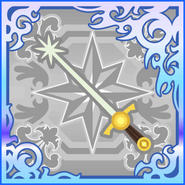 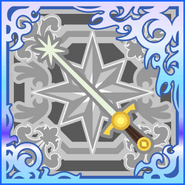 The Sun Blade is likely inspired by the Sword of the Sun, from the 1968 Toei anime film The Great Adventure of Horus, Prince of the Sun.