Seek you the Sun-Cryst, slumb'ring star. In tower on distant shore it dreams. The mother of all nethicite, the source of its unending power. The Dynast King, his fallow shards, coarse trinkets cut from Sun-Cryst's light.

The Sun-Cryst (天陽の繭, Ten'you no Mayu?, lit. Heaven's Cocoon) is a source of great power in the world of Ivalice in Final Fantasy XII. A gift from the gods, it is stored in a far away tower, the Pharos. From the top of the tower, Mist spills out of the Cryst, which makes the tower look like a lighthouse, thus its name.

The Sun-Cryst is a large fragment of nethicite, presumed to have been either made or discovered by the gods of Ivalice, the Occuria, who use it to control mankind and their history by giving shards of it to those they trust. To make sure no one can easily take its power, the Sun-Cryst is stored at the Ridorana Cataract, in a large tower.

When Ivalice fell into turmoil, the Occuria chose a man by the name of Raithwall to whom they gave the Sword of Kings to cut shards off the Sun-Cryst. He traveled to the Pharos and cut off three shards; the Dawn Shard, the Midlight Shard and the Dusk Shard. With these shards, he united Ivalice, and became King Raithwall, Ivalice's first Dynast King.

Seven centuries later, the Occuria choose Princess Ashe as their new Dynast King and sent her to the Pharos, so she may cut her own shards of nethicite to use in destroying Archadia, the greatest threat to the Occuria's influence in Ivalice.

Realizing her people's strength comes from their unity and not the nethicite, Ashe decides to destroy the Sun-Cryst instead. Dr. Cid appears, and, reuniting the three shards of Raithwall with the Cryst, he calls forth the Mist directing it to the Sky Fortress Bahamut.

After defeating Dr. Cid, Ashe and Vaan try to destroy the Cryst, even though the resulting explosion would kill them both. The sky pirate Reddas intervenes, and takes the Sword of Kings from Ashe. He strikes at the Cryst, destroying it in an explosion of Mist, sacrificing himself.

The Sun-Cryst's destruction dispelled the barrier the Occuria had erected around Lemurés, making the new sky continent explorable. Many sky pirates traveled to the sky continent, but ended up having their anima sapped and turned into Feolthanos's pawns; one such victim was Mydia. 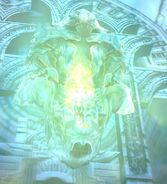 The "ten" in ten'you is the kanji for "heaven", but also used to denote something natural.

"Cryst" means crystalline. The dash between the terms is commonly used with terms related to the Occuria: e.g. Dynast-King and Treaty-Blade (although both terms are also seen without the dash). The dash could be seen similar to an interpunct, which is used in Japanese to indicate that a full proper noun is two separate words.