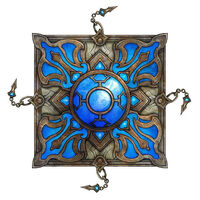 A Summoning Gate is a gameplay element in Final Fantasy XII: Revenant Wings. It acts as a portal between the real world and the illusion world of the Yarhi, allowing them to be summoned by those holding auracite.

Summoning Gates glow with a different color depending on who controls the gate:

A Summoning Gate must be in the player's control to summon Yarhi from it. To capture a hostile or neutral gate, the player must tap the gate with the stylus to send a group leader to pray in front of the gate and convert it to the allied cause.

A bar representing the conversion of the gate will appear, and when the icon reaches the blue side of the bar, the Summoning Gate is captured, adding 10 maximum Affinity to player stores. Enemy units may also attempt to capture blue Summoning Gates. Thus, it is sometimes advisable to keep several units near allied summoning gate.

When a blue Summoning Gate is selected, three options will appear: Summon, Queue, and Fortify Esper.

This command allows the summoning of Espers designated in the battle's selected Esper Troupe. First, a group leader must be selected to determine which group the summoned Espers will be part of. Next, specific species of Espers are chosen to be summoned. The proper amount of Affinity must be available in order to summon Espers; a red X will be drawn across Espers who cannot be summoned due to lack of Affinity.

Once selected to be summoned, Espers will require a period of time to leave their world and manifest themselves in Lemurés. The Queue option shows which Espers have been summoned and the amount of time until they materialize on the battlefield. Summoning can be quickly canceled by tapping the Queued Esper's image on the screen.

After the events at the Fane of Tehp Qul, the player's Astral Power (AP) may be used to fortify Espers. AP accumulates slowly during the course of a battle, and up to five AP crystals may be in stock at one time. To fortify one of the Espers in one's Troupe, the player selects from one of the five Espers, and all members that particular species will level up once, including any that may be called upon in the future.

An Esper's first fortification costs an Astral Crystal. If that particular Esper is chosen to be upgraded again, it will cost two Astral Crystals for another extra level. The next fortification for that Esper will cost three Crystals with the same one-level up, and so on. A species of Esper may be leveled up five times, since only five AP Crystal may be stocked at once.