The Summoner (召喚士, Shōkanshi?), also known as the Caller or Evoker, is a job that appears in various games in the Final Fantasy series. One of the earliest introduced job classes, summoner first appeared in Final Fantasy III.

Summoners are known for their ability to summon magical beasts to fight for the party. In games with summoners as part of the storyline, summoner ranks exist, such as Conjurer and high summoner. Summoners generally have some of the lowest physical stats but also the highest magical stats. Their weapon arsenal varies by game, but most show them equipping rods, staves, daggers, and sometimes whips. While the details of their appearance vary between games, summoners often wear robes of green and white, and in some games also bear large horns on their foreheads, said to allow communication with their otherworldly allies. Whether these horns are natural growths or part of the summoner's outfit varies between games.

Summoners use special magic that allows them to call forth summoned monsters. Summons usually cost more MP than the average spell, but are much more powerful. In some games, summoners also have the ability to cast either Black Magic or White Magic as well as to summon, thus making them more versatile.

Usually, summoners and their summons possess some important story element; such as the summoners of Final Fantasy IV, Final Fantasy IX and Final Fantasy X, where the concept of a summoner is focused and expanded further from a mere job class and where their presence and powers significantly change the landscape of the world they live in.

The Summoner is a job gained from the Earth Crystal. Summoners are magic users who have harnessed the power of high summoning—the ability to call forth a combined Black and White Magic effect. Summoner is considered to be a powered up version of the Evoker job.

The Evoker is a job class gained from the Water Crystal. Evokers can summon powerful beings into battle. Each possesses a direct attack (Black) and an indirect effect (White), triggered randomly at the time of summoning.

The summoners are a race of people who possess the power of summoning as a birthright. Most of the summoners are wiped out at the beginning of the story, with Rydia being the only female survivor, while a few unnamed male summoners remain in Mist. As a summoner, Rydia is capable of learning Black Magic and Summon Magic. Enemy Summoners are fought in the Feymarch.

Rydia? and Rydia are the only summoners that appear.

Rydia is a summoner, but is unable to summon during the early portions. Maenad is also able to summon. Enemy Summoners appear in Kain's Challenge Dungeon.

The Summoner is a job class obtained from the Water Crystal. The summons they use must either be bought from shops or defeated in battle.

The summoners were a race of people who lived in Madain Sari and possessed a horn on their heads. Almost all the summoners were killed after Garland destroyed their hometown. Garnet, her mother, and Eiko's parents and grandfather survived the attack. By the beginning of the game, only Garnet and Eiko are left alive. Garnet/Dagger and Eiko can summon Eidolons and cast White Magic. However, Dagger's abilities focus on her summons while Eiko's focus on her White Magic, and the two learn different spells and summons.

The summoners are people who embark on pilgrimages across Spira to pray to the fayth of each temple to obtain the power of the aeons they create. All summoners' goal is to obtain the Final Aeon and to use its power to defeat the monster known as Sin. A Summoner who manages this feat posthumously gains the title of High Summoner. Yuna is a summoner in the player party, and can use Summon Magic and her Sphere Grid path teaches her White Magic, although she can also learn other abilities from the other characters' paths. Seymour Guado is also able to summon, as are many non-player characters, like Dona and Isaaru.

The Ronso are willing to construct a statue of Yuna with a horn on her forehead. This is further alluded in Final Fantasy X-2 where depending on the player's choices related to the Ronso throughout the story they may construct such statue.

An advanced job, the Summoner wields the ability to summon Elementals and Avatars to aid the party in battle.

The Summoner is a Soul Crystal job for the Arcanist class. Summoners can call the Egis, small versions of Primals, to fight alongside them in the battle. Summoners primarily rely on damage over time effects, but at higher levels they can inflict devastating area-of-effect attacks.

Summoner is a strong, magickal-based job that can summon espers to deal massive damage to all enemies, or aid allies. Their magick stats are high, but their other stats are lacking.

Summoner is a job for the viera race. Summoners wield staves and are the paragon of MP with outstanding Magic growth compared to even most nu mou jobs.

The Summoner has a versatile action ability that allows them to aid comrades and foil adversaries, rendering them a valuable asset despite the greater-than-usual MP costs of the summons call for. The Summoner's damage area is unique in that it consists of two tiles outward and one tile diagonally from the selected point on the battlefield, for a total of thirteen affected tiles.

Summoner job is available to viera. The Summoner's Magick growth is astounding, even better than nu mou jobs. They call on Espers to aid them in battle, either by damaging foes or healing and casting spell effects on the party. To compensate for this unique casting ability, their Move stat is low and their summons cannot be cast far or tell enemies from allies.

Summoner is a starting job class available to both groups. 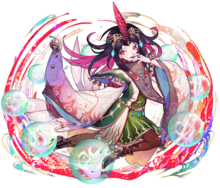 The Summoner is a fire-elemental Eidolon. It can be obtained as a signet for Jornee to equip and teaches her the Burst abilities.

In addition, Aemo, Jornee, and Maina are able to obtain Summoner themed costumes from Babil Tower.

In the original free-to-play versions, the characters Refia, Lenna, and Faris were depicted as the summoner jobs from their respective games for their signets. Series veteran summoners also appeared as signets, comprising of Rydia, Garnet, Eiko, and Yuna. In addition, a signet based on the Summoner job from Final Fantasy III appeared in the form of the Summoner OR summon.

In the Duel Colosseum, when chosen, the Summoner job card will cause the next hand to consist only of treasure and job cards.

Yuna represents the Summoner job and can summon the aeons she acquires during the storyline of Final Fantasy X: Valefor, Ifrit, Ixion, Shiva, and Bahamut. The Summoner job card appears in the Labyrinth mode, and ensures the next cards drawn to contain only treasure and job cards.

The Summoner is also a job that can be selected for a character in the player's party for Quick Battle, Friend Cards, or wireless matches. When a Summoner calls their summonstone, it regenerates afterwards, allowing another usage. The Summoner in turn unlocks the Sage job with the Black Mage and White Mage.

The Summoner appears as a character card.

Bonding with otherworldly creatures requires both ample magic and an open heart.

The Summoner is a character available to the party, he summons Bahamut during battle. It unlocks at level 75.

These unique spellcasters call forth powerful creatures with abilities capable of affecting entire groups of enemies and allies. The might of these summons can easily overwhelm lesser forms of magic.

Summoner appears as a recruitable character. He is unlocked in Magitek Factory on Classic in Final Fantasy VI storyline as the First Time Reward.

The witch Meia can summon espers, eidolons and aeons in multiplayer mode.

Summoner
Add a photo to this gallery

Yoyo and Sendak are Summoners with the ability to summon the Holy Dragons, causing devastating damage on several enemy parties because of their wide area of effect. In addition they have the Red Magic command containing three spells: One that restores HP, a Fire-elemental spell, and a spell that raises the Attack Power of a single target. They can equip staves, rods, and robes.

As a crossover collaboration with Final Fantasy Airborne Brigade, the Resident Evil smartphone card battle RPG Minna to BIOHAZARD Clan Master boasts character Claire Redfield as a Summoner. This is likely in correlation with how in most of her appearances, her games show that she has the most direct support on her missions, such as with the character scenario trading "zapping" system and teaming up consistently during her campaigns.

Summoner is an asterisk obtained from Mephilia Venus in Bravely Default and Bravely Second. The Summoner specializes in dealing damage. While they can call upon the great power of mighty creatures, it takes a high amount of MP to use do so repeatedly, though they compensate with their innate ability Convert MP, thus letting them gain MP from damage taken. The job also appears in Bravely Default: Praying Brage

Edea and Ringabel as Summoners in Bravely Default.

Magnolia Arch as a Summoner in Bravely Second: End Layer.

Summoner sprite in Praying Brage.
Add a photo to this gallery

Arc as a Summoner in Final Fantasy III (DS).

Rydia in Final Fantasy IV: The After Years (PSP).

Bartz from Final Fantasy V as a Summoner. 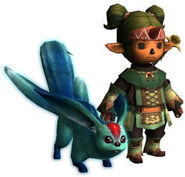 A viera Summoner in Final Fantasy Tactics A2: Grimoire of the Rift.

A Summoner in It's New Frontier.
Add a photo to this gallery