Through Datamining... Scholar, it appears that through switching jobs, that you may actually change some of your skills. Of course this is all per information mined from Phase 3, so... things may change. As it is still up to speculation it is still up to the wiki to give up up to date information as we gain it. 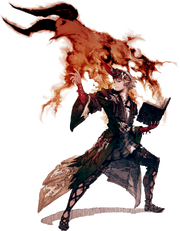 Retrieved from "https://finalfantasy.fandom.com/wiki/Summoner_(Final_Fantasy_XIV)?oldid=1700196"
Community content is available under CC-BY-SA unless otherwise noted.