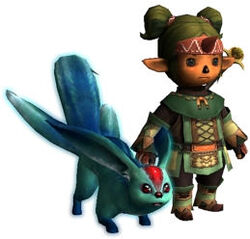 By making pacts with the legendary "avatars," these heretic mages have unlocked the secrets to the forbidden magic of Vana'diel.

Summoner (召喚士, Shōkanshi?) is an advanced job in Final Fantasy XI. Summoners can summon two types of creatures; Avatars and Elementals. Avatars are creatures like the traditional Summons, but are treated as pets. Summoners obtain Carbuncle immediately upon unlocking the Summoner job class. The others must be gained by individual quests. Elementals are simply spirits representing one of the 8 energy types in the game—Fire, Ice, Lightning, Water, Wind, Earth, Light, and Dark—but spirits are mostly thought of as useless since the summoner does not control the use of their abilities. Spirits make up for this fact by being able to cast Ancient Magic respective of their own element.

Summoners can fill a variety of roles. They can create powerful positive status effects for the party, heal the party, impose unique negative effects, and also do damage.

Upon reaching level 30, a player can accept the quest "I Can Hear a Rainbow" to become a Summoner. The player must first find a Carbuncle Ruby, a gem dropped by leeches. It is a rare item and can take several hours to find.

After obtaining the ruby, the player must visit the House of the Hero in Windurst Walls and then experience six weather elements (Fire, Ice, Lightning, Rain, Wind, and Earth) with the ruby in the inventory. This requires a player to travel to many different areas because weather varies by area. After completing this objective, the player must visit a stone circle in La Theine Plateau to obtain the Summoner Job Class.

Avatars can be obtained through various quests that involve defeating the avatar in combat. Elemental Spirits can be obtained either through merchants, or by defeating certain monsters that drop the scrolls (these scrolls can also be bought on the Auction House). Each Avatar/Elemental Spirit has an initial MP cost as well as a perpetuation cost that is based on the SMN's level.

Blood Pacts are abilities used by Avatars controlled by Summoners. There are two types of Blood Pacts: Blood Pact: Rage and Blood Pact: Ward. Rages deal damage, either with spells or with physical damage attacks. Wards provide protective magic, curative magic, or positive or negative status effects for the party or enemy.

While some Summoners use a different support job choice, almost every summoner uses White Mage as their support job, especially at lower levels. This allows them to heal the party, provides them with the ability to remove negative status ailments, and grants them protective magic that will aid them in their role as summoner. SMN/WHM has access to Dia II, which substantially increases the damage of powerful physical blood pacts by weakening the enemy's defense. SMN/WHM can cast Blink, Aquaveil, and Stoneskin, defending the Summoner in the event of an avatar's death, until a new avatar can be summoned. SMN/WHM is also the only job combination granting Summoners Curaga and Teleport spells.

As of the September 2010 version update, which raised the level limit to 85, SMN/RDM has access to Refresh at extremely high levels, making Red Mage a viable support job for Summoners at levels 82+. However, in exchange for constant MP restoration / Perpetuation Cost reduction, SMN/RDM sacrifices an extremely long list of useful spells, including all status healing magic and Reraise. However, unlike SMN/SCH, SMN/RDM has access to Dia II, which substantially increases the damage potential of powerful physical blood pacts by weakening the enemy's defense.

Scholar has gained immense popularity with summoners, due to the fact it offers both schools of magic, which is similar to support job Red Mage. However, the key differences are Light Arts, Dark Arts, and Stratagems. These abilities increase the Summoner's magic skill to a B+ (calculated from the main job's level rather than the level of the Scholar sub) and reduce the MP cost of White and Black Magic. As such, a 80SMN/40SCH using Dark Arts will have 266 skill in Elemental Magic, Enfeebling Magic, and Dark Magic, making any offensive spells used much less likely to be resisted. Further, under Light Arts, the SMN retains access to healing staples such as Cure III, Raise, and Reraise.

This in turn allows the Summoner to deal damage and heal proficiently. Dark Arts and Light Arts also reduce mp costs for relevant magic by 10%, allowing a Summoner to save more MP for their avatars. Finally, the Sublimation ability allows a Summoner to instantly recover a stash of MP that they acquire by taking gradual HP damage. SMN/SCH's greatest sacrifice is no access to Dia II, reducing the damage potential of physical Blood Pacts. The Accession stratagem gained at level eighty allows the Summoner to heal multiple targets at once.

Ninja subjob is a handy tool in the solo summoner's arsenal for soloing the deadliest monsters that a summoner can defeat alone. The summoner casts Utsusemi, then sends an avatar in to attack. The summoner then runs away a good distance, only coming close to issue blood pact commands, and when the avatar is killed, the enemy will dash to the summoner. A SMN/WHM will likely be dead or have the summoning interrupted if the monster reaches the summoner before the new avatar is out, but Utsusemi will absorb the enemy's attacks long enough for the new avatar to appear and take hate. The summoner then repeats the process. Summoner/Ninja is usually a solo or duo job combination for notorious monsters or monsters that are higher level than the summoner.

Concept art of a Summoner.

Promotional artwork of the Summoner job class for by Yuzuki Ikeda.

Promotional artwork of the Summoner job class by Yuzuki Ikeda.