Sorcerers with the ability to summon magical beings and harness their power.

The Summoner is a job in Final Fantasy V obtained after the Water Crystal shatters. It is one of two of the most powerful mage jobs in the game, boasting the highest Magic Power in the original game, and bested only by the Oracle in the Advance and succeeding remakes, making it potent with other magic skillsets since they can boost the power of elements with rods.

The Summoner makes for one of the best crowd control jobs, as most of their spells target all enemies for high damage, and it has access to various elements. The Summoner also has possesses various defensive options, including Golem, Phoenix, and Carbuncle. The only downside to the Summoner is the high MP cost of their skills.

Mastering Summoner for all four characters in the mobile and Steam versions earns the player the achievement "Master Summoner".

The Summoner wears green and yellow robes; Lenna's robes are shorter. Each character appears to have a horn growing out of their head. Based on other games that introduced this concept, it is either a clip-on, or other such item that can be removed and is only for show.

On the offensive, Summon allows access to the Fire, Ice, Lightning, Earth, Water, and Wind elements, as well as two powerful non-elemental attacks.

On the defensive, Summon gives the ability to grant Reflect to the party, revive one KO'd ally with full life, nullify physical damage up to a certain point, and drain HP from enemies to restore HP to the party. Summon also grants the ability to inflict Paralyze or Petrify to a single enemy, and a chance to inflict Instant Death to all enemies on-screen.

Any job equipped with Summon Level 1 will gain their character's base Freelancer Magic +17 if their default stat is lower. For each additional Summon level up to level 5, the Magic bonus is increased by 4 per level, for a maximum of +33 Magic at Summon Level 5.

Thus, the base Magic stat for a character with Summon equipped is as follows:

Upon mastery, Freelancers and Mimes gain the Summoner's base Magic unless they already have a higher base from another mastered job.

The Summoner's innate command ability is Summon. Leveling the job up allows the character's other jobs to also use the skillset with even the best summons when at Level 5.

The summon orb used in the summon animations. 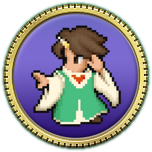