Summoners are able to draw the hidden powers of summon beasts. Their powers will be further enhanced if they can find the legendary beasts...

The bearer of this certificate has completely mastered the evoking arts and is deemed worthy of the title of Master Summoner.

The Summoner is a job class in Final Fantasy III gained from the Earth Crystal. Summoners are magic users who have harnessed the power of high summoning—the ability to call forth a combined Black and White Magic effect. Summoner is considered to be a powered-up version of the Evoker job.

Final Fantasy III marks the series's first appearance of the Summoner job class, as well as summoned monsters and the Summon command.

The Summoner can summon creatures for their ultimate attack. When the Sage job is unlocked, it is advised to switch to that one.

Summoner is the only class able to summon each creature with one ultimate attack. 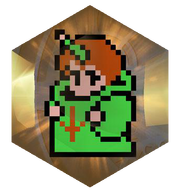 Summoner OR is an earth-elemental summon. The summon's special attack is Bahamur, which raises the attack and magic power of all allies for three turns and removes the null physical status from the enemy party. Summoning Summoner OR costs 2 point from the Consumption Gauge.

Summoner OR allows the wielder to use the following abilities:

Summoner from the 3D version has a Triple Triad card in Final Fantasy Portal App. 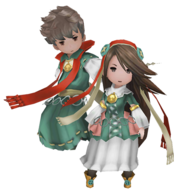 The Conjurer is a job obtained by defeating Sage Yulyana, the creator of the Asterisks, at Yulyana Woods Needleworks, at the end of a sub-scenario that takes place in Chapter 6.

Arc as a Summoner.

Refia as a Summoner.