The Summoner is a fire-elemental Eidolon that appears in Final Fantasy Dimensions II. It can be obtained as a signet for Jornee to equip by completing her final character episode, "A Princess's Stage Debut".

The Summoner signet is perhaps the strongest of Jornee's signets, providing balanced stats and a high magic stat of 90 at its full evolved form. In addition, it teaches Jornee her strongest wind magic-type ability, Burst. When combined with the signet's passive to increase Jornee's wind-elemental damage potency by 20%, she can inflict massive damage to a single enemy with Burst, and can also provide heavy group damage with her Tornado abilities.

The Summoner summon is based on the recurring job class in the series. The design for the Summoner contains traditional elements associated with the job's appearance in the series, donning robes and bearing a large horn on her foreheads. The design also appears to take inspirations from Lenna's Summoner design from Final Fantasy V, having a similar length short robe and styled short-length hair. The final signet artwork depicts the Summoner's outfit resembling the traditional color scheme of the summoner garb and flaming green orbs encircling her.

In the original free-to-play versions, the Summoner signet taught the Astral Flow ability, which is a reference to the Summoner's job ability of the same name from Final Fantasy XI.

The Summoner's special attack is Dispelling Technique, which removes all buffs, boosts, and magic reflection from all enemies. In addition, it delays the next action of the enemies. Summoning the Summoner costs 2 bars from the Summon Gauge.

The following are the abilities Jornee can learn from the Summoner:

In the original free-to-play versions of the game, the Summoner signet was a god-tier fire summon that could only be obtained through the game's summon draw shop. However, it taught the Astral Flow ability instead of the Burst ability. The Summoner was an SSS rank summon and could be equipped by any party member. In addition, a player that drew the Summoner signet from the shop would also obtain a costume voucher redeemable for a Summoner-themed costume for Aemo, Jornee, or Maina.

In the premium versions of the game, the Summoner's Astral Flow ability was removed from the game and replaced with the Burst ability. In addition, its original passives were replaced with the Wind ATK +20% passive, making it the only summon in the premium versions of the game that teaches a passive ability that boost's the elemental attack potency of an element not associated to the element of the summon. 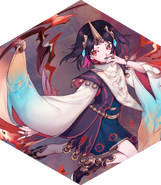 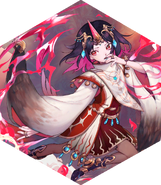 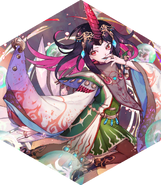