The Sulyya Springs is a location on Gran Pulse in Final Fantasy XIII. Its waters and creatures are protected by the fal'Cie Bismarck. To get there from the Central Expanse portion of the Archylte Steppe, one must travel through the Mah'habara Subterra, whose entrance is at the northern end of the steppe and ride the fal'Cie Atomos.

These subterranean springs rest within the mountainous northern reaches of the Archylte Steppe. A unique environment, the springs have spawned an equally unique diverse ecosystem.

The bio-luminescent plants that line the waterfront represent a particular danger to unwary visitors. Their beautiful, ghostly plays of light often draw unsuspecting onlookers to the water's edge, where the area's guardian fal'Cie is quick to strike.

After using the fal'Cie Atomos to reach the springs from the Subterra, Snow hands Vanille Serah's crystal tear. Looking at Cocoon through the crystal, Vanille remembers the day she met Serah in Bodhum.

Vanille says Serah probably had the same vision of Ragnarok they had when they were made l'Cie, and speculates Barthandelus lied about Serah's "true" Focus. She claims Serah overcame her Focus by putting Cocoon's fate in their hands, but Snow tells her he already knows that. Later, after the party decides to set up camp, Snow and Lightning talk about Serah at the Skyreach, promising they will see her again together.

The track "Mysteries Abound" plays in "The Skyreach". 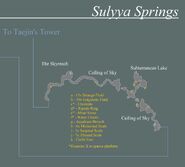