The Subterranean Lake, also known as the Underground Lake, is a location in Final Fantasy III. The party enters it by jumping into the lake in Dwarven Hollows while in the Toad status. This is where Gutsco has taken the stolen Horn of Ice.

The Warriors of the Light chase Gutsco, who stole one of the Horns of Ice from the Dwarven Hollows, in order to retrieve the Dwarven relic. They easily find Gutsco at his hideout, along with his stolen stash and defeat him, retrieving the Horn of Ice.

The party arrives in the Dwarven Hollows to find the dwarves in a furor over the theft of one of their precious Horns of Ice. At the dwarves' request, the party heads for the subterranean lake to retrieve the horn.

"Dungeons" from the DS version of Final Fantasy III

The background music that plays inside the Subterranean Lake is the "Dungeons" theme of Final Fantasy III. 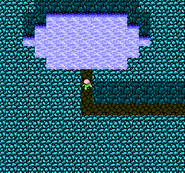 Entrance to the Subterranean Lake (NES).

An underground lake or a subterranean lake is a lake under the surface of the Earth's crust. Such a lake may be associated with caves, aquifers, or springs. They are typically very low in salinity.