The (Subterra, 大灯台 地下層?, lit. Daitōdai Chikasō) is a location in the land of Ivalice in Final Fantasy XII. It is the subterranean levels of the Pharos at Ridorana.

The Subterra is the underground areas of the Pharos at Ridorana. The only way to access it is by finishing the Pharos event first.

To enter the Subterra, players have to use the Dais of Ascendance located at the center of the Pharos near the Gate Crystal. It will take players down to the first level, Penumbra. From there, players need to obtain Black Orbs to unlock the entrances to the other levels: Umbra and Abyssal. 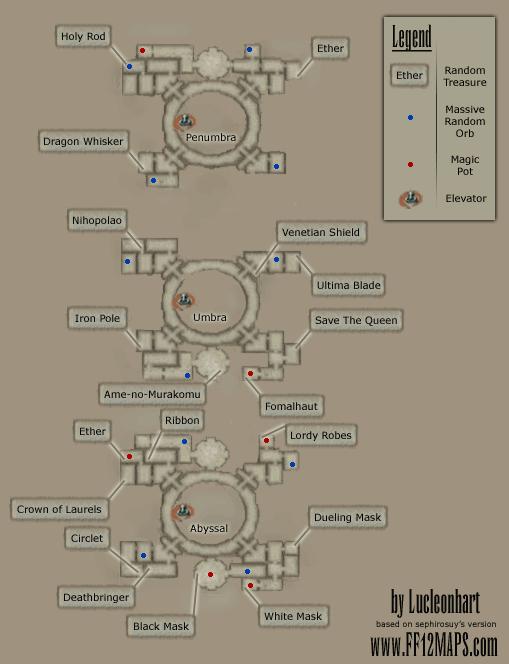 It is recommended to have strong weapons, armor and accessories that guard against Confuse. It is also useful to stock up on items, especially Vaccines, Phoenix Downs, Antidotes and Eye Drops just in case a Ribbon is not available. Gambits for Arise, Steal and Curaja are also useful. Also, it is strongly advised not to equip the Diamond Armlet while searching treasures in Penumbra, as it will turn the treasures into a Knot of Rust.

After lighting up the pedestals in the Abyssal floor, a new destination appears at the Dais of Ascendance. If the Phoenix has not yet been defeated, the player is prevented from reaching the final area by a "mysterious force" and returned to the the First Ascent. If the Phoenix has been defeated, the mysterious force disappears and allows the player to access a new floor, which contains the hunt mark Shadowseer, if the bill has already been accepted from Montblanc.

This floor is only accessible preceding the Shadowseer Elite Mark. After the hunt is completed, the player cannot return to Hell's Challenge.

Retrieved from "https://finalfantasy.fandom.com/wiki/Subterra?oldid=1475815"
Community content is available under CC-BY-SA unless otherwise noted.