Around Junon and Junon Underwater Reactor

Harpoon
Submarines are underwater vehicles used by the Shinra Electric Power Company in the Final Fantasy VII series. They are primarily used around Junon and to explore the underwater area around the Junon Underwater Reactor.

Submarines are the only vehicles in Final Fantasy VII that can submerge to the ocean floor and explore the Bottom of the Sea locations. They can be docked and picked up at various natural harbors next to Junon, near the Gold Saucer, and just outside Lucrecia's Cave. There are two submarine types: the red version and the gray version. The kanji on the gray submarine means "#2" (弐, Ni?), while the kanji on the red submarine means "#1" (壱, Ichi?).

Considered fugitives by the Shinra management due to their involvement and collaboration with Verdot, the Turks attempt to locate the required support materia needed to help Verdot's daughter, Elfe.

Discovering one located in Gongaga with the help of Reeve Tuesti, the Player Turk abducts a submarine from the Junon harbor with Cait Sith and navigates the mined ocean floor to get to the village unseen.

The party steals a "Shinra Sub" while hunting for the Huge Materia in the underwater reactor. While boarding the vessel, they can choose to fight a few Shinra guards in the bridge, the same three guards Cloud meets after he first jumped into the higher levels of Junon with the dolphin. Alternatively, the party can spare the guards and hold them prisoner instead.

If the player's submarine gets destroyed, Cloud and the party are saved by Mr. Dolphin and wash ashore in Under Junon. The player loses the submarine they had, but they can get another one by going to Junon and taking the entryway previously guarded by a dog to the Junon Submarine Dock. This is the only way for the player to get a red submarine; otherwise their submarine will be gray.

The submarine can also be used to explore the ocean in the center of the world map. If the submarine touches the Emerald Weapon, a battle initiates. The submarine is required to get to the Gelnika, and is needed to obtain the Ancient Key necessary to progress through the game.

Both the gray and the red submarines share the same layout, though the torpedo room can only be accessed in the former. To access the room one would have to fail the submarine mission, and it is this same criteria to be able to see the interior of the red submarine. 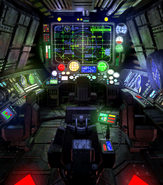 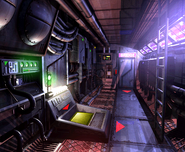 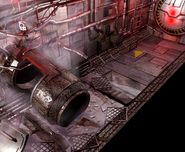