The lone female member of the four Generals, Styx the Witch is a cunning enchantress with a penchant for popping up unexpectedly. Her dominion over the forces of water enable her to manipulate liquid as she sees fit, and she uses its glassy reflection to conceal her true form.

Styx is one of the Four Generals of Avalon in Final Fantasy Dimensions. She is associated with the water element.

Styx appears to be a beautiful woman with brown hair with a red accessory and wears a revealing outfit with a blue cape and boots. When she was first encountered she is a robed figure. When she was reincarnated, she has the form of a mermaid with a blue tail with red on the ends.

In Rusalka, Styx posed as a sea witch. She met with Eduardo in this disguise, and fooled him into making a pact with her, upon which she turned him into into a frog. She then held Eduardo's mother, Edna, captive to lure the Warriors of Light into a trap. She attacks the Warriors of Light in the deepest part of the Underwater Shrine, but is defeated and makes a retreat. However, when the Warriors of Light attempt to leave the shrine and return to the surface, Styx attacks them again during their ascent, revealing her previous retreat to have been a ruse. However, her attack is foiled by cannon fire from Bikke's ship, and she is forced to leave the area.

Later, Styx assumed the form of Sarah's mother while searching for a crystal in Castle Burtgang before Sarah exposed her. The party has a battle with her, and when she is defeated, she is killed by Shango of the Lightning for her failure. However, Styx is resurrected as a mindless mermaid-like creature by the Empire in order to aid them in securing the Dark Matter. The Warriors of Light and Darkness confront her one last time and put her out of her misery. After being defeated, she mentions a prophecy and the Warriors come to think that the Empire has a prophet. This hints that Elgo, who revealed himself as a prophet to the Warriors when they first met, is part of the Empire.

Styx fights the party a total of three times during the course of the story, the first in her cloaked form, the second in her usual form and the third in her final form. 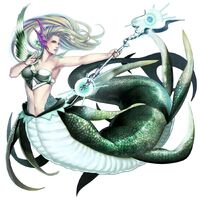 Styx appears as a water-elemental Eidolon. She can only be equipped by Morrow and teaches him Blizzaga Blow abilities. Her summon attack is Undine's Shout, which deals water-elemental damage to all enemies and lowers the magic for three turns.

Styx appears on a card.

[view · edit · purge]The Styx is a river in Greek mythology that formed the boundary between Earth and the Underworld often called Hades which is also the name of this domain's ruler.