A mysterious weapon made for mages that not only increases their magical powers, but their physical strength as well. Although its striking power may not compare to that of the swords normal warriors carry, it gives the usually feeble mage a chance to protect him or herself when the situation calls for hand-to-hand combat. Apparently, a great number of female mages can be seen carrying this weapon about for self-defense purposes.

Striking Staff is a weapon for Aeris, which can be bought for 1,300 gil at Gongaga and Junon before obtaining the Highwind, or stolen from Eligor and Harpy. It provides 32 Attack, 100 Atk%, 7 Magic, +2% Critical, and has one linked Materia slot and two single Materia slots.

The Bladed Staff is a weapon for Aerith that provides the Lustrous Shield ability, a defensive ability that creates a stationary shield to block projectiles. The Bladed Staff focuses on improving Aerith's normal attacks by improving her critical hit rate tremendously.

Rod of Striking is a weapon for Yuna, obtainable if the dominant ability on any rod is Strength +5%.

Striking Staff is a Rod obtained by finding and turning in the Aurora Key found at Gronoa Shrine Entrance. It provides 16 ATK and 42 MAG.

Has plenty of oomph.

The Striking Staff appears as a 2-handed rod within the Forsaken Dungeon. It provides 41 Weapon Atk, 9 Durability, +2 Magic Atk, +3 Magic Def, -1 Speed, and -1 Consumption Rate. Only Clair Andrews can equip this weapon. 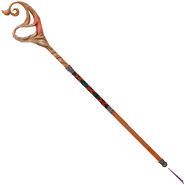 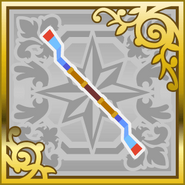 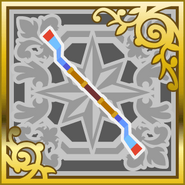 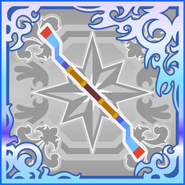 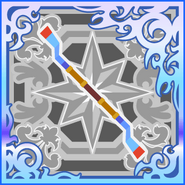