Strike is a series of abilities in the series which refers to weapon or support abilities that allow a character to attack with a specific element or status ailment, mostly found on weapons. Strike abilities for elements adds that element to any physical attack done by the character, while Strike abilities for statuses have a 75% chance of being inflicted on a target when attacking physically.

The following are not named in any game, but are given these names to keep in line with the current names:

The following are Touch abilities in Final Fantasy X-2, but act the same way a Strike ability would:

There are numerous other Strike abilities, since there is essentially a strike for just about any status ability.

Elemental Strikes don't function as they should due to a bug. The Strikes Firestrike, Icestrike, and Lightningstrike are properties of specific weapons. They cannot be applied during battle via abilities, or granted to weapons other than those that already have the property.

Elemental Strikes are properties of specific weapons, with the addition of Holystrike.

Elemental Strikes appear on specific weapons, though Throw is a attribute only available on Bows and Spears. Status Strikes are available on certain weapons. Enemies can also can use elemental strikes, but the developers didn't make use of them and they go unused.

Elemental and Status Strikes are available as properties of specific weapons.

Elemental and Status Strikes can be applied to attacks if a player equips a materia that causes a status or deals elemental damage, such as Fire, Lightning, Destruct, or Hades, into a character's weapon with a linked slot next to an Added Effect materia (for statuses) or Elemental materia (for Elements). The level of the materia has no effect.

Elemental and Status Strikes can be granted to a character by junctioning the appropriate spells into a character's Elemental Attack or Status Attack slot, if available. The more spells of the chosen spell that is in stock when equipped, the higher chance it will inflict that status or the more elemental damage the character will do.

Elemental attack can be anything between 0 and 100%. Elemental Defense starts at 800 (0%), 900 nullifies damage and 1000 absorbs the damage. If an enemy is shown to be weak against an element, its Elemental Defense is below 800. If damage becomes negative (due to high Elemental Defense), the target is healed by that amount.

Target doesn't get the status

Status Strikes can be accessed via through either the Add Status ability or by using Zidane's Soul Blade ability while equipped with a weapon that has a status effect.

Strike abilities can be found on weapons dropped from enemies or customized directly onto them. There are both elemental strikes and status strikes, with the latter all having a respective "Touch" ability as well, which only inflicts the status with a 50% base chance, as opposed to the 100% offered by a Strike.

When a weapon has two or more elemental strikes and an enemy with various elemental affinities is attacked, the most favorable element will be used when calculating damage. Elemental weaknesses can stack, but resistances do not.

Status strikes do not bypass status immunities, but they can be stacked with their Touch equivalents if the latter is already applied to a weapon, increasing their effectiveness against enemies with status resistances.

All of the Strike abilities except Zombiestrike appear, and it marks the first appearance of Gravity, Tetra, and Omnistrike. All of the Status Strikes are Touch abilities, but work the same way as a Strike ability does.

Several accessories, such as Lag Shock and System Shock, allow for Status Strikes, while other accessories such as Fiery Gleam and Icy Gleam, allow for Elemental Strikes. In addition, all Strike abilities can be used through Garment Grids.

Flamestrike, Froststrike, Sparkstrike and Aquastrike appear as Ravager abilities. These abilities perform a single attack that deals elemental physical damage, rather than granting the effect for the rest of the battle.

Enfire, Enfrost, Enthunder and Enwater appear as Synergist abilities. These abilities grant one character an Elemental Strike buff that causes all attacks to deal elemental damage until the buff wears off.

Using one of the Ravager's elemental strikes while buffed by the Synergist's Enspell ability of the same element will display a cosmetic effect matching the corresponding -ra spell.

Strikes are effective in short battles against enemies with elemental weaknesses that are strong against magic-type damage, where taking time to buff with Enspells and having to perform Paradigm shifts would slow the fight down. If no Enspells are available, a Strike is more effective than a Commando's Attack when targeting a physical elemental weakness, due to its chaining potential.

The Synergist role's enspell abilities also appear. The water element has been removed, so Enwater has been replaced by Enaero. 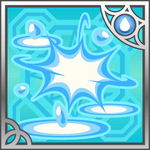