Stratoavis is an enemy from Final Fantasy X fought at the Monster Arena in the Area Conquest once the player has caught at least one of each of the three fiends in Besaid: Dingo, Condor and Water Flan. It has the same model as the Zu.
See also: Strato Avis

After using two physical attacks, Stratoavis makes its wings glow, before using Paean of the Heavens on its next turn, which deals fractional damage to the entire party, equal to 15/16 of each character's maximum HP and inflicts Darkness and Delay (strong). Once its HP is reduced to 1/3, it will fall to the ground and be limited to a Crawl attack. It will not die if reduced to 0 HP while still in the air, instead landing with 1 HP remaining. Against aeons, it will use physical attacks.

The Stratoavis being made from the creatures from Besaid makes it one of the easier monsters to defeat. It is recommended to use a weapon that has either Counterattack or Evade & Counter.

Stratoavis is not immune to Slow attacks, but it will only work 10% of the time because of its Slow resistance. The same can be said about Armor Break. A Frag Grenade or Auron's Banishing Blade Overdrive work 100% of the time (if successful), and so are more effective to break its Full Break resistance.

Once Stratoavis has landed, summoning Shiva ensures it has little to no chance of hitting her, due to the low accuracy of its Crawl attack. 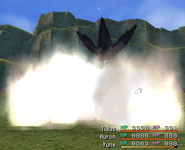 Paean of the Heavens.
Add a photo to this gallery

Retrieved from "https://finalfantasy.fandom.com/wiki/Stratoavis_(Final_Fantasy_X)?oldid=3381460"
Community content is available under CC-BY-SA unless otherwise noted.