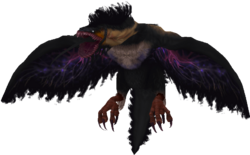 Strato Avis (ストラトエイビス, Sutoratoeibisu?), also known as Stratoavis, is a recurring enemy in the series.

Strato Avis is an enemy fought at the Lunar Ruins, exclusive to the Game Boy Advance and later remakes of the game. It attacks with strong physical attacks, but is otherwise not a threat. It can very seldomly drop the powerful Chocobo Suit armor, as well as the valuable Silver Apple.

Stratoavis is an enemy fought at the Monster Arena as part of the Area Conquest section after capturing one of each fiend in Besaid. It is the weakest of the Area Conquest monsters, but is still dangerous to an underprepared party. It will mostly attack with a physical attack, but can also charge up to attack the entire party with Paean of the Heavens.