PlayStation 4, PlayStation 5, Xbox One, Xbox Series X/S, PC (Epic Games Store)
Stranger of Paradise Final Fantasy Origin is an action RPG and a spin-off title in the Final Fantasy franchise developed by Koei Tecmo Games and Team Ninja, and published by Square Enix, released March 18th, 2022. Revealed on June 13, 2021 at the Square Enix Presents digital presentation for that year's E3, Stranger of Paradise follows Jack, Ash, Jed, Neon and Sophia in their quest to defeat Chaos as Warriors of Light.[1]

A trial version of the game was released the same day as the reveal, exclusively on PlayStation 5.[1] However, the demo was "corrupt and unplayable" at the time of release, with Square Enix promising they would resolve the issue.[2] Two days later the issue was resolved with a patch and the demo time was extended to compensate for it.

A second limited time demo was released on October that same year for both PlayStation 5 and the Xbox Series X|S. This was released alongside more previews of the game accompanying a new TGS trailer and a release date.[3] [4]

A third and final demo, was released on March 9th, 2022 for PlayStation 4, PlayStation 5, Xbox One and Xbox Series X|S. This demo is an initial portion of the full game, up to the Western Keep, with its save data carrying over to the final release.[5]

Stranger of Paradise features an action heavy battle system, that is said to "link to the story".[1] The player controls Jack, who can change Jobs and equip 8 different kinds of weapons and features a party that consists of 3 characters at a time. Party members' equipment can be changed and customized.[6][7] Additionally, players can take on levels in multiplayer, with up to 3 people, each controlling a party different party member.

Jack and his companions can change jobs, with the player controlled one being able to switch between two jobs on the fly. Jobs can be upgraded using job points across a job tree.

Most interactions in the game begin from the map screen, which allows the player to choose locations to visit, equip their characters, access the smithy, and perform the "Talk" action with the people of Cornelia. Talk allows the party to interact with people located in Cornelia, with the conversations changing depending on the current story mission.

The game is split into missions which can be accessed from the world map. Locations have story missions, bookended by cutscenes, and side missions that grant additional items and experience. Although they use the same maps and geometry, side missions have remixed enemy encounters and different available paths.

Set in a "dark fantasy world" version of the setting of the original Final Fantasy, Jack and his companions claim to be Warriors of Light, though they harbor doubts about their place in the prophecy.[1]

Final Fantasy takes place in an unnamed fantasy world with three large continents. The world's elemental powers are determined by the state of four glowing crystals that each govern one of the four classical elements: earth, fire, water, and wind. But it is not the same world as depicted in first Final Fantasy game.[6][7] Additionally, various locations in the world are based on settings from other Final Fantasy games.[8] The "Fool's Missives" logs in the Archives section refer to other games in the series as "Dimensions".

The Four Fiends took control of the crystals over the course of four centuries, their dwindled light resulting in the world’s decline. At an unspecified point, the sage Lukahn tells of a prophecy about four "Warriors of Light", who will save the world in a time of darkness.

Three of the Warriors of Light- Jack, Ash, and Jed - arrive at the kingdom of Cornelia, each carrying a darkened crystal of each element. They offer their services to the King of Cornelia to kill the source plaguing the world: Chaos. Before leaving, the warriors are approached bY kingdom's princess Sarah to find a missing Cornelian knight named Garland. They encounter a person matching Garland’s description at the Chaos Shrine, only to be revealed as another Warrior of Light named Neon who lose her comrades and join Jack’s group.

The four assembled Warriors of Light travel east to Pravoka for details of their mission from the mayor, only to end up liberating the town from a band of pirates and have them take them to the abode of the dark elf Astos for the answers they seek.

Tetsuya Nomura came up with the concept for Stranger of Paradise, an action game where one conquers dungeons, around the time after the release of Dissidia 012 Final Fantasy, and united that concept with a series of Final Fantasy games he was ideating that were focused around "the story of an angry man", being Garland from the first Final Fantasy. Nomura considered it a challenge to find a middle ground for the title, between "mature" and "stylish".[1][8]

Around the time Stranger of Paradise was ideated, Dissidia Final Fantasy NT was in development, in collaboration with Team Ninja. Due to their pedigree in action games, the team at Square Enix looked to collaborate with them again for this title.[8]

During development the team was unsure if they should allow players to direct party members and influence their growth, but would make that decision based on feedback from the demo.[6][7] There was a thought among the development team of having only Jack in combat, but it was decided against as they felt the concept of a party was integral to the Final Fantasy series.[6][7] The game itself can be played in online cooperative multiplayer, with other players being able to take control of companions. This was done in an effort to balance the game out for people that do not regularly play action games, allowing them to team up to decrease the difficulty of the game.[8]

The team took efforts to attempt to fit the game as an "authentic Final Fantasy" title, ensuring the vocabulary and systems fit with what was previously established, while also finding that the differences are part of what make each title feel like one. Game director Daisuke Inoue was told by various developers that worked in older Final Fantasy titles that the willingness to take new ideas characterized the Final Fantasy series. When thinking of the different locales for the game to explore, the team took inspiration from other Final Fantasy titles and added areas from multiple games, though adjusted from their original setting to fit with the tone of the game.[8]

Following the feedback from the first Trial Version, the team focused on improving certain aspects of the game, including graphical improvements, better lighting, combat and difficulty adjustments, AI improvement and frame rate consistency.[4]

The game released on March 18th, 2022, in both physical and digital formats, excluding PC where it released exclusively digitally through the Epic Games Store. Additionally a Digital Deluxe Edition of the game launched the same day and includes access to a digital artbook, digital mini soundtrack and access to the Season Pass, including upcoming DLC Trials of the Dragon King, Wanderer of the Rift and Different Future. Pre-ordering either digital edition will receive early access to the game as well as the Braveheart weapon and the Lustrous Shield. All purchases are similarly eligible to obtaining the early purchase bonus weapon Rebellion.[3]

Upon the release of its reveal trailer, Stranger of Paradise received mockery for its dialogue, particularly the repetition of the word Chaos,[9] with publications citing its tone as "super-edgy"[10] and "so bad it's good".[11]

Seemingly as response to the mockery, the second trailer distanced itself from using the word "Chaos" in the English version,[12] with producer Jin Fujiwara mentioning in an interview that the team was not particularly pleased with the initial reception, citing the initial mystery as part of the reason the word was repeated so much.[13] Despite this, the game received further mockery for a scene in the second demo, with publications comparing Jack's attitude to "a stubborn child who doesn’t want to listen to their mom"[14] and "the demeanor of a moody teenage boy",[15] though others hoped the game was "in on the joke"[16] and "self-aware."[17] Despite the tone, the game's demo was generally praised for its combat options and scope.[18][16] 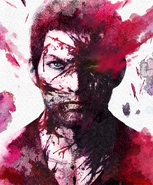 Key art featuring Jack's party and Garland in a sea of clouds, based on concept artwork for the original Final Fantasy titled the Cloudsea Djinn..

Keyart featuring the main characters in the silhouette of Garland. 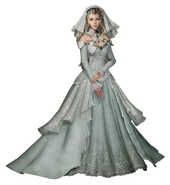 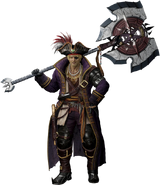 Jack, Ash and Jed arriving at the Chaos Shrine.

Jack and Garland in combat.

Jack as a Warrior fighting a goblin.

Jack as a Black Mage fighting a skeleton.

Jack as a Dragoon fighting a wolf.

Jack finishing off an enemy, turning their blood to crystals.