The Strahl is a new prototype ship for the Archadian Empire, but its unique folding-wing design proved too expensive and the ship was going to be scrapped. When Balthier escaped Archades to become a sky pirate, he stole the Strahl. The airship has since been upgraded so much it no longer resembles its original design.

Balthier and Fran lend Strahl to Vaan's party until they decide to head to the Tomb of Raithwall. Since the tomb is located in a jagd, the airship is unable to fly there. Balthier renders the airship invisible and leaves it hovering over the Dalmasca Westersand with the moogle mechanic Nono looking after it. The Strahl is damaged when the 8th Archadian Fleet explodes nearby, and it's up to Nono and his moogle mechanics to repair it.

Later, Reddas gives the party a new skystone that allows airships to fly over jagd. Balthier teaches Vaan how to fly the Strahl in the event the former has to "do something heroic." After the installation of the new skystone, the Strahl can reach anywhere in Ivalice.

As the Sky Fortress Bahamut is about to engage with the Resistance above Rabanastre, the party flies the Strahl to it to stop Vayne. After defeating Vayne, Balthier and Fran stay behind to restore the Bahamut's power by fixing the ship's glossair rings. Vaan takes control of the Strahl and flies the rest of the party to safety.

Believing Balthier and Fran to have perished in the Bahamut's crash, Vaan and his friend Penelo look after the Strahl until, one day, they enter the hangar and find the ship stolen. The pair finds a note from Balthier declaring that the Strahl is back in the hands of its rightful owner, and he and Fran are on their way to new adventures, having found an entirely unexplored continent.

Balthier and Fran fly the Strahl to the Cache of Glabados where Vaan and Penelo join them on Vaan's new airship. As the floating island begins to crumble Vaan loses his airship, and the party uses the Strahl to return to Rabanastre.

Balthier and Fran go on their separate way and only meet up with Vaan's party much later when Balthier attempts to destroy the second Auralith. In the event's aftermath, an earthquake shakes the island and the Strahl is damaged. Balthier and Fran board the Galbana, the airship used by Vaan's party, while Nono is tasked with repairing the Strahl.

Later, Nono relates a message that the Strahl is in danger and the party hurries to the airship to find it guarded by their aegyl friends. The party wipes out the enemy sky pirates and their Yarhi and save the Strahl.

After Feolthanos has been felled the sky continent of Lemurés begins crumbling. The party boards the Strahl and watches the Galbana fly away, guided by what is left of Feolthanos's anima.

The player cannot move around the inside of the Strahl. Instead, boarding the Strahl in Final Fantasy XII will bring up the map of the world and a list of destinations the party can fast-travel to, similar to Final Fantasy X.

The Strahl becomes available after visiting Balfonheim Port after the events in Giruvegan. The player can board the Strahl at an aerodrome, as well as certain locations on the field. In an aerodrome the player must speak to the woman in the counter marked Private Airships. If the player looks out the window in an aerodrome, they can see the Strahl outside. On the field, there is anchor on the ground where the Strahl can be boarded. These spots are marked on the player's field map and on the world map are denoted by the area having a yellow zigzag.

Unlike the save and gate crystals, inspecting or traveling through Strahl doesn't break a battle chain. Thus one can chain weaker enemies and then travel through the Strahl to stronger enemies of the same kind in another area.

The Strahl appears in an Airship Field Music Sequence for the theme, "Heart of a Child".

Bhujerba appears as an area and Strahl can be seen on the background.

Strahl in hangar in Rabanastre.

Strahl about to turn invisible.

Strahl in its folded state. 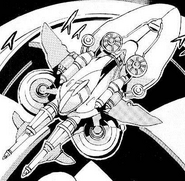