His collection of monster costumes[2]

An elderly gentleman who has spent his whole life pursuing the secrets of monsters...

Strago Magus is a playable character in Final Fantasy VI. He is Relm's surrogate grandfather and a resident of Thamasa. As a descendant of the Magi, Strago is one of a handful of humans who possess natural magic, manifested as the Lore command that allows him to use Blue Magic.

Strago is an old man with a small stature. He is balding with messy white hair similar to a mohawk, a large white beard and mustache, and grey eyes. He wears a red cloak with a high collar with white and red stripes, a black top, and blue pants with polka dots. His Super NES and Gameboy Advance sprites depict him with a green top and yellow pants.

Strago often acts silly and immature, something Relm scolds him for, and he can be clumsy. Despite his advanced age he is still energetic and adventurous, though to himself he ponders if he is getting too old for such behavior. He hates being looked down upon for his age and is indignant when Locke calls him a geezer. Though he and Relm often bicker, the two truly love each other and Strago is extremely protective of her, loving her as deeply as though she were actually his granddaughter.

Strago is very educated on the myths and legends of espers, and often delivers exposition on topics related to them, such as the War of the Magi or the Warring Triad.

As a Blue Mage, Strago is able to copy the magical abilities of monsters. His appearances in spin-off titles draw from his pool of Lore skills in Final Fantasy VI for his skillset, though which Lores he has available varies. He is often associated with the element of water due to his starting Lore Aqua Breath.

As a young man in Thamasa, Strago hunted the legendary monster Hidon with his friend Gungho. The beast made its home on Ebot's Rock, and when the island sank into the ocean Strago was forced to give him his dream, something that lingered with him for decades.[3]

A man named Clyde came to Thamasa and fathered a child, Relm. The mother passed away and Clyde left town and abandoned his daughter. Strago took Relm in and raised her as a granddaughter.

During the Third Gestahlian Campaign, Terra, Locke and Shadow came to Thamasa seeking a group of espers that had attacked the Imperial capital Vector. They inquired about any information on the espers with Strago, who let slip he had heard of espers but quickly denied it and insisted the town could be of no help. The suspicions of the three were piqued and they stayed in the town inn.

Relm was playing at a neighbor's house that even when it caught fire and a panicked Strago roused the party to aid him. With the fire intensifying, Strago ignored the town's ban on citizens using their powers and cast a magic spell to try and put out the flames. The Mayor of Thamasa reprimanded Strago for this breech, but the circumstances and urgings of other townsfolk convinced him to allow it. The flames were still too strong and Strago decided to go inside to find Relm. Terra and Locke went with him and found Relm in the back of the house, guarded by Shadow's dog Interceptor. The house began to collapse and the three fell unconscious, and Shadow arrived to rescue them with a smoke bomb.

As Relm recovered in Strago's home, he explained to Terra and Locke that Thamasa was founded by the Magi and all the residents are descended from them, which is the source of their magical abilities. Strago agreed to help the two look for the espers and suggested they search the western mountains, which teemed with magical energy and were apparently a sacred place to the espers. The three departed to the mountains and entered the Esper Caves.

Deep in the caves they found effigies of the Warring Triad, and Strago told Terra and Locke about the legend of how they turned themselves to stone at the end of the War of the Magi and were hidden in the esper world beyond the Sealed Gate. The three agree the espers must be nearby, but as they leave the shrine they are attacked by Ultros. During the fight Relm, who had followed the group, intervenes and sketches Ultros' portrait, causing him to flee. Terra and Locke are impressed with Relm's show of power, and though Strago is reluctant, he allows Relm to accompany them.

The group finds the espers nearby, led by Yura. Yura explains they lost control of their powers when they emerged from the gate and Strago theorizes something about the esper world allows them to focus their powers better. The espers agree to return to Thamasa for peace negotiations with General Leo. At the village during the meeting, Kefka arrives and reveals this was all a trap by Emperor Gestahl to lure the espers out and transform them into magicite. Kefka and his escort incapacitate the party and killed the espers, and Kefka slays General Leo when he tries to stop the massacre.

The rest of Terra and Locke's allies, the Returners, arrive on their airship, the Blackjack, and regroup, Strago accompanying them. On their way to Vector Setzer informs them they heard the Empire was headed for the Sealed Gate and some statues, horrifying Strago. Gestahl and Kefka enter the esper world, find the Warring Triad, and use their power to raise the Floating Continent. Strago warns that if the Warring Triad were moved out of alignment, their powers would run out of control and destroy the world. His warnings came true when Kefka killed Gestahl and moved the Triad, causing a cataclysm that reshaped the world and destroyed the Blackjack, scattering the party.

Strago believed Relm had perished and joined the Cult of Kefka, selling his soul to them. The party found Strago marching around the base of the tower and he would not respond. When Relm saw him in this state, she called out to him and the sound of her voice snapped Strago to his senses, and he joyfully rejoined the party.

The two returned to Thamasa and found Gungho had been injured. He told Strago it had been Hidon, and he begged Strago to avenge him. Strago, eager to avenge his friend and his own pride from giving up the hunt in his youth, set out to Ebot's Rock, which was above sea again in the wake of the cataclysm. Strago confronted Hidon deep in the cave and defeated it. He returned to Gungho to boast of his feat and stayed up late into the night telling a dramatized tale of the battle, until he fell asleep. Unknown to Strago but realized by Relm, Gungho had been faking the severity of his injuries to give Strago motivation to confront Hidon and fulfill the dream of his youth.

After the party defeated Kefka, Kefka's Tower began to collapse and the party fled to their new airship, the Falcon, to escape. Strago stumbled on a conveyor belt while leaving, earning a scolding from Relm. One of the airship cranes began to pull out as they reached it, and Strago quickly scampered up the debris of the tower to grab it and pull it back down. He and Relm escaped to the Falcon and joined the party looking over the world as they began to rebuild from Kefka's destruction.

Strago is a Blue Mage who learns enemy attacks (Lore) by witnessing them being used. As a mage he has low physical stats but decent magic stats and access to rods, maces and robes, which can boost his magic. His relatively weak Lores, limited stats, and lack of access to female-exclusive equipment make him less suited to the role of a mage than some other characters. Similar to Relm's Desperation Attack, his Sabre Soul attack instantly kills an enemy that is not immune to Death.

Strago's theme is named after him, and is the main theme played in the town of Thamasa. The theme is mixed into the ending.

A piano version of Strago's theme is included on the Piano Collections: Final Fantasy VI album.

Strago appears as a playable character.

Strago is a playable character. He could be recruited the Challenge Event Back to the Skies as the First Time Reward for completing the event's stage Phantom Train in Part 1.

In Secret of Evermore, Strago appears among the crowd of spectators that includes other Final Fantasy VI characters at the gladiator battle of Antiqua. He appears alongside Terra, Locke, Mog, Relm, and Umaro. 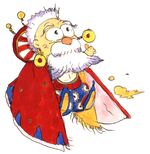 During development, Strago had a 65-year-old Geomancer wife named Lara. They had amusing arguments, claiming the other will die first, but by the end of the game their dynamic would have reversed to insisting the other would outlive them.[4][5]

Shadow and Relm's relationship as father and daughter was officially confirmed in developers' interviews in 1995. The developers initially considered having a scene in a bar (presumably in Thamasa) where Strago asks Shadow to reveal his identity. The dialogue was supposed to be as follows:[4]

Strago: I have one request... Show me your face. Even if you are him, I have no intention of wasting time trying to talk you into staying. I just want to know... for Relm's sake...
Shadow: ...... (He takes off his mask and shows Strago his face. However, his back is turned so that the player can't see.)
Strago: Thank you... Shadow. ...Come, let's have a drink.

"Strago" may be related to the Italian word for "wizard", stregone.

Strago's name was originally romanized as Stragus in the original Japanese instruction manual and the game's ending, and likely would have been this in English if not for the game's six-letter name limit. (The katakana form, ストラゴス, is five characters long.) The name has also been variously rendered as Straggus or Stragos. It may actually derive from Ancient Greek στραγγός, strangós, which means "twisted", alluding to Strago's eccentric personality. Ancient Greek did not have a true gg sound, and two consecutive gammas (γγ) were always used to render a ng sound instead; as such, στραγγός may have been misread as straggós. (More confusingly, in modern Greek, γγ is romanized ng but often pronounced simply [ɡ] especially in the modern dialect of Athens, while γ alone is romanized g and pronounced [ɣ] instead. The modern Greek meaning of στραγγός has changed since ancient times; it now means "drained".)

[view · edit · purge]Magus is the Latin word for "wizard". Its plural is Magi. The Japanese katakana form マゴス, Magosu, alludes to Ancient Greek Μάγος, Mágos, from which the Latin form Magus originally derived. The word is not native to Greek either; it is ultimately of obscure ancient Iranian origin.

If an Ancient Greek origin of both Strago and Magus holds true, then Strago Magus can be rendered in Ancient Greek as Στραγγὸς Μάγος, which literally means "Twisted Wizard".