Stopga is used by enemy Time Mages and it halts the actions of all targets in range.

Stopga is a magic spell in the Kingdom Hearts series. In Kingdom Hearts, using the spell will make the targets, in the widest area of effect, stop moving for a limited amount of seconds determined by Sora's Max MP plus 2. In Birth By Sleep, the spell inflicts a twelve-second freeze on the enemies targeted while its lower tier Stopra inflicts six. In Chain of Memories, three Stop Cards can be used to activate Stopga. 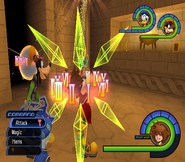