Stop (ストップ, Sutoppu?) is a recurring status effect in the series. A stopped unit is frozen into temporal stasis, so that time stands still for them even as other units act normally. This allows opponents to get several turns and attack without retaliation until Stop wears off, returning the affected unit to normal time.

This section about a status effect in Final Fantasy III is empty or needs to be expanded. You can help the Final Fantasy Wiki by expanding it.

An afflicted unit cannot act until the status wears off. This also halts timers for other effects, though that part is somewhat buggy (see Stop bug). Haste causes Stop to wear off faster, while Slow prolongs it.

Stopped characters cannot evade any attacks and have all statuses that have a timer on them stop, with the exception of Sap, which will continue to act.

Stop wears off approximately 38 seconds from the time it is applied to the target. If Terra is stopped while tranced, and the trance bar runs out during her stop time, she will be permanently tranced for the duration of the battle.

Stop halts the time counter for the afflicted target, preventing their ATB gauge from filling, but also halting time based effects such as Barrier or Regen. Linking Added Effect Materia with Contain, Time or Choco/Mog makes the character immune to the effect. It can be cured by DeSpell, White Wind, Angel Whisper or Aeris's status healing Limit Breaks.

Stop lasts for around 13.3 seconds, and targets under Stop are unable to avoid attacks. If the target was afflicted with any status effects prior to being stopped, the status effects are halted as well; Poison and Regen won't damage or heal, and effects like Protect won't wear off.

Stopped units are considered defeated, although the party gains no EXP or AP from them, and as such having all of the alive party under the Stop will result in a Game Over. Party members can defend against Stop by equipping the Locomotion ability. Stop also halts the countdown from Doom. Stop can be removed with Remedies.

Stop prevents all movement animations from triggering, meaning affected units cannot be chained because their stagger animation will not trigger. The ATB bar is turned grey and will not move until the effect is cleared.

Stop makes the target unable to take any action. The player can inflict the status through the Festivalist's ability Spinner.

The character is frozen in time and cannot move or act. Remove with a Chronos Tear.

While a target is stopped, status effects are also halted. For example, Sap will stop draining HP for the duration of Stop, and its duration will be paused until Stop has run its course. This can be abused by casting Reverse followed by Stop on a character, thus allowing the character to absorb all forms of damage until Stop wears off. This is especially useful for bosses which always target the nearest character, as equipping the other party members with ranged weapons will keep them alive while the Reversed character is taking all the hits. A stopped character is immune to Decoy, so a stopped character with Reverse can't be decoyed. A stopped character can be used to trigger the Immobilize glitch.

Stop is removed by Chronos Tear, Remedy (once the Remedy Lore 3 has been purchased), and Dispel. The accessories Power Armlet and Ribbon make the wearer immune to Stop.

Status when suspended in time and immobilized.

The afflicted is frozen in time and unable to act. It wears off fast, but the character recoils as they come out of the status. Targets can be stopped while midair. The player can inflict it on enemies with the Vigilantes. Prompto can inflict stop using Ascension node Scintilia. Enemies inflicted with stop become vulnerable as well. The Golden Hourglass and Ribbon protect against it, as well as the Resilient food buff. It can't be cured with Remedies.

Stop is an added effect of select KM, lasting 5–10 seconds when an enemy is struck. A Stopped enemy appears frozen in place with a purple clock icon overhead.

When inflicted with Stop a character stops moving. It freezes the character's CT meter. Stopped characters cannot evade or use reaction abilities, including Blade Grasp and Abandon. Stop will wear off on its own after 20 ticks, and it can be removed with Choco Esuna.

This section about a status effect in Final Fantasy Tactics A2: Grimoire of the Rift is empty or needs to be expanded. You can help the Final Fantasy Wiki by expanding it.

Stop completely prevents the target from moving or acting for a short period of time. The target can be attacked multiple times without the effect wearing off. Automatic HP recovery for party members will not function, nor will extended effects of other negative status effects such as Burn. Haste is also cancelled. Certain abilities and Triad Maneuvers can inflict Stop.

Stop can be cast by combining Life and two attack spells (Fire, Blizzard, Thunder). When Stopped, the target is unable to move or attack for a short period of about 3 seconds.

Stop is a status effect in the Kingdom Hearts series. Enemies in stop status are prevented from moving for a limited amount of time. In most games, when a stopped enemy is attacked, no damage is dealt at first, but the accumulated damage is dealt when Stop wears off.

Stop makes the affected character unable to act. Victims also do not regenerate BP and cannot recover by being hit with a physical attack. However, stop cannot be removed with items or Esuna/ga. Instead it can only be cured by using Dispel, or naturally over time.

Porom stopped in Final Fantasy IV: The After Years (PSP). 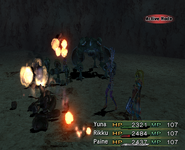