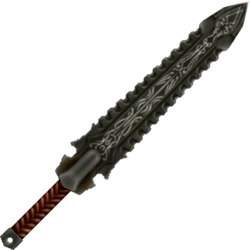 Stoneblade (ブレイクブレイド, Bureiku Bureido?), also known as Gorgon Blade, Medusa Sword, Basilisk Steel, or Break Blade, is a recurring weapon in the series. The weapon commonly inflicts Petrify status or is Earth-elemental, and is usually a mid to high-rank weapon.

Break Blade is a high-rank weapon used by heavy melee classes such as Warrior or Knight. It has an Attack power of 125 and inflicts Gradual Petrify upon hit. It can be found in the Ancients' Maze.

The Stoneblade (also known as Medusa Sword and Petrifying Sword in the Easy Type version) is a high-rank weapon dropped from Black Lizard, Gorgon and Medusa, as well as Catoblepas in the GBA and mobile versions. It has an Attack power of 77 and Accuracy of 16, and has a 10% chance of inflicting Gradual Petrify upon hit.This weapon is metallic.

In the 3D version, Stoneblade is Earth-elemental and casts Break when used as an item. It has an attack power of 77 with an accuracy of 90 with the same properties as the 2D versions. It can be equipped by Cecil and Kain, and Golbez if hacked into the party.

Stoneblade is the strongest sword for Cecil dropped by Black Lizard and Medusa found in the Tower of Babil. It has an 77 Attack and 16 Accuracy, and has a 10% chance of inflicting Gradual Petrify upon hit.

The Stoneblade provides 77 Attack, 16% Accuracy, and has a 10% chance of Gradual Petrify. It can be dropped from Black Lizard, Medusa, and Catoblepas. It can be equipped by Cecil, Ceodore, Kain, and Golbez.

Sword that may cast Break upon striking an enemy.

Stoneblade (originally called Break Blade) is a mid to high-rank weapon used by Terra, Locke, Edgar, and Celes. It has an attack power of 117, randomly casts Break, and enables the Bushido and Runic commands, although Cyan can't natively equip it. It can be found hidden in a room with 5 glass capsules in the Magitek Research Facility, or stolen from Outsiders.

Break Blade is a Greatsword with damage 67 and delay 466, wieldable at level 75 by Paladins, Dark Knights, and Rune Fencers. It is obtainable for free from the Splintery Chest as part of the Trial of the Magians system and forms the base of most of the greatsword trials. As such, it can eventually be upgraded into the Empyrean Weapon Caladbolg, a "coin weapon" used to learn the weapon skill Torcleaver, a greatsword that attacks multiple times, or an weapon enhanced with one of the 8 elements for a large variety of different possible effects.

In the original PlayStation 2 version, Stoneblade is the second strongest one-handed sword being surpassed by Durandal. It has an Attack power of 95, and requires 80 LP to use. It can be bought from the bazaar for 17,800 after selling Taurus Gem x3, Orichalcum x2, Chimera Head x2, or found as a treasure in the Great Crystal upper level. Unlike all other one-handed swords which grant a +5 Evasion to wielder, the Stoneblade grants no Evasion bonus. Swords are among the slower weapons with 2.88s charge and 1.2s action time.

In the Zodiac versions, it now provides 95 Attack, 5 Evade, 32 CT, 5% combo rate, and requires the Swords 8 license for 80 LP. It can be found as a treasure in the Cerobi Steppe (The Terraced Bank), bought from the bazaar for 17,800 gil after selling Orichalcum x2, Chimera Head x2, and Taurus Gem x3, and from the Hunt Club sidequest. It can be equipped by the Knight and the Time Battlemage.

Stoneblade is the fourth strongest weapon for Vaan. It has an Attack power of 90, Magick of 45, Speed of 60, and is Earth-elemental. It can be crafted with the Anvil of Earth recipe using a Massive Bone, a Glittering Dust, and a Terra Crystal. It uses a generic sword sprite during battle.

The Break Blade is a

Paladins. It is a possible reward from the quest

Stoneblade is a high-level sword. It provides 83 attack power and inflicts Break on an enemy. It can be found in Lufenia Ruins and Massive Cavern or bought for 19800g in Braska.

With petrifying powers, this blade turns enemies to rigid rock and solid stone.

A sword from a faraway world. The guard on its hilt is designed to look like a pair of feathers. The stone used in the forging of its blade was formed by the eyes of Medusa, and thus it, too, has the power to turn enemies to stone.

A sword from another world made of materials foreign to this one. Its blade is split into two sections at the tip, and it has the ability to turn the foes it strikes into stone. In the world of Spira this weapon was made by infusing petrify grenades into it, and it may be possible to replicate the process in this world as well.

Basilisk Steel is a Sword obtained during the Final Fantasy X event, Macalania Woods. It provides 60 ATK and has a 30% chance of inflicting Petrify.

Break Blade (FFIII) is a Sword obtained during the Final Fantasy III event, Cave of Tides. It provides 95 ATK and has a 30% chance of inflicting Petrify. 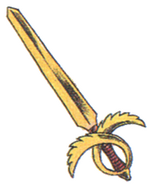 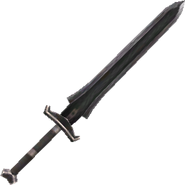 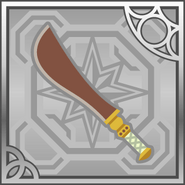 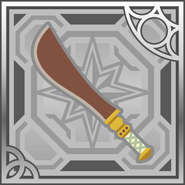 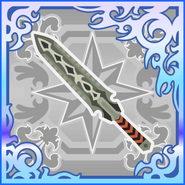 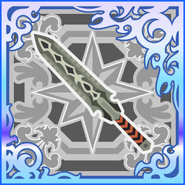 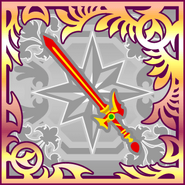 This gallery is incomplete and requires Final Fantasy VI (iOS) added. You can help the Final Fantasy Wiki by uploading images.
Edged weapons
Community content is available under CC-BY-SA unless otherwise noted.
Advertisement