Stone Killer is a support ability in Final Fantasy IX for physical attackers, allowing them to increase the power of their Attack toward stone enemies, the smallest enemy group in the game. It costs 4 Magic Stones to equip.

Killer abilities in Final Fantasy IX are reminiscent of weapons in the Nintendo-era Final Fantasy games that dealt more damage to specific types of enemies.

Stone Killer is learned from Platinum Helm, Adaman Vest, Gold Armor, and Power Vest for variable amounts of AP; Amarant learns it the fastest at 10 AP, where Zidane requires the most at 30 AP. Equipping multiple equipment pieces that all teach Stone Killer learns the ability faster.

Adaman Vest teaches the ability to Zidane and Amarant, first stolen from Ralvuimago and later bought from shops. The duo's Power Vest is first found in Oeilvert and is also stolen from the boss there.

With Stone Killer active, using Attack deals 150% normal damage to stone enemies, but there are only three such enemies in the whole game. It does not stack with other Killer abilities if the enemy belongs to more than one category, but does stack with MP Attack and Elem-Atk gear, and the attack can still critical. If the attacker also has Healer (only possible with Amarant), the amount healed with Attack is increased against stone enemies. Stone Killer affects any use of Attack command against stone enemies: via Attack, Charge!, or Counter. It does not affect damage from any other move besides the basic Attack command. 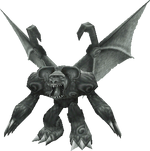 There are only three stone enemies: Stroper in Iifa Tree, Epitaph in Oeilvert, and Gargoyle in Ipsen's Castle. Stone Killer is fairly pointless, because stone enemies are best defeated by simply using a Soft on them (though this forgoes experience gain from them). Inexplicably, Stone Killer also costs more to equip than most other Killer abilities.

Valia Pira is not classified as a stone-type enemy, despite its appearance.