The Stone Golem is a monster in Final Fantasy Mystic Quest and the reincarnation of the Ice Golem. It guards the fourth floor of Doom Castle in a maze-like chamber modeled after the Ice Pyramid.

Stone Golem enters battle with two Cerberi and can use the Corrode Gas attack to inflict Fatal to one party member. It resists the Flare spell. It has four phases, depending on how much HP it has left. The first phase has it kneeling. After losing a quarter of its health, it starts melting, and the following phases expedite the melting (this is because its sprites were reused with the Ice Golem).

Using the White spell is the best way to defeat it. The player can also defeat it with the Exit spell. 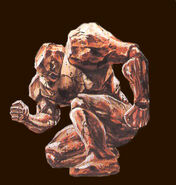 Retrieved from "https://finalfantasy.fandom.com/wiki/Stone_Golem_(Mystic_Quest)?oldid=3252162"
Community content is available under CC-BY-SA unless otherwise noted.