Gaze V, also known as Glare 5 in the Final Fantasy Origins release, is an enemy spell that inflicts Petrify to one target. It is used by Basilisks and Hecteyes.

Originally called Petrify, Stone Gaze is used by the Lizard species, as well as Lunar Titan. It inflicts Gradual Petrify on one party member, and is usually used as a counterattack.

Stone Gaze returns as Black Lizard ability. It inflicts Gradual Petrify on the character that previously attacked it as a counterattack.

Known as Petrify Glare and Stone Touch, is an enemy ability use by the Ice Lizard and the Medusa. The boss from Rydia's Tale, the Demon Wall, can also use the Petrify Glare attacks. Another enemy ability, Stone Gaze, can be used by the Basilisk, which slowly petrify a party member.

Originally called PetriGlare, it is used only by the Basilisk enemy and it inflicts Petrify on a party member.

Stone Stare is an enemy ability used by Gagighandi, which inflicts Gradual Petrify on one party member.

Petrify Stare, used by Cockatrice and Glacial Eye, inflicts Petrify to one party member. It is used as a counter against magic attacks for Cockatrice.

Baleful Gaze is used by Cockatrices and Lizards, which can petrify players with a gaze attack. A similar ability is Petro Eyes, used by Dragons, which lasts a very long time.

Stone Gaze, used by several enemies in the game, inflicts Petrify on one party member. Some enemies also know the ability Stone Touch, which is similar to Stone Gaze.

Stone Gaze is a skill used by Basilisks, which inflicts petrification in a cone in front of the user. Similar techniques such as Petrifying Eye and Petrifaction are used by certain bosses or elite marks; in some cases players can avoid being petrified by turning around.

Gaze is an ability that has 5 uses and inflicts Stone to a group of enemies. This ability is used by Medusa, Seeker, Watcher, Wraith, BlackCat, Evil Eye, Scylla, Beholder, Ghost, Lilith, Nike, Basilisk, DarkRose, and Ganesha.

StonGaze is a status inflicting ability that has 15 uses, it also increases a Robot's HP by 9. It inflicts Ston to one group of enemies. This ability can be used by Basilisk, Beholder, Evil Eye, Medusa, and Watcher.

StonGaze can inflict Petri on one enemy. Evil Eye, Igasaur, D.Bone, Medusa, Lamia, Big Head, Dagon, Echidna, and Chaos can use this attack. 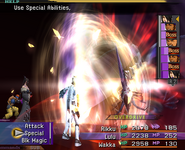 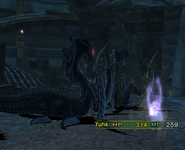 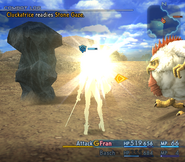 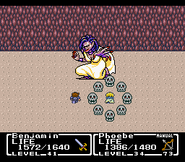