Stona (SOFT on the NES) is a level 6 White Magic spell which removes Petrification from a single ally.

The spell can be bought at Crescent Lake and learned by the White Mage and White Wizard job classes. In the GBA/PSP/iOS releases it costs 10 MP to cast and unlocks for purchase at Level 26.

Stona is a Level 6 White Magic used by the White Mage, Devout, Sage, and Onion Knight jobs. It can be bought in Doga's Manor for 10,000 gil, has a 60% Accuracy, and costs 6 MP. The spell is also used for the Gold Needle item.

Stona is a White Magic spell used by Dagger and Eiko, learned from the Multina Racket and Lamia's Flute. Stona cures Petrify and Gradual Petrify from one target and costs 8 MP. It can be reflected and works with Return Magic. Stona does not inflict instant death on stone-based enemies like Soft does.

Stona is a type of Healing Magic, and can be learned by White Mages and Scholars.

Stona is a White Magick spell. Its License is White Magick 3 that costs 30 LP. It removes the two status effects Stone and Petrify from a target.

In the Zodiac versions, Stona's License is White Magick 5 that costs 40 LP. The spell is found in Jahara, and in Trial Mode Stage 57 (with Diamond Armlet). It can be used by two job classes, White Mage and Red Battlemage.

Stona is a spell selectable during Onion Knight's Spellbook EX Burst, but it does nothing.

Stona is a White Magic ability with a Rarity of ☆☆. It removes Petrify from one target, it can initially be used four times and it can be honed to Rank 5. It can be created by using Lesser White Orb x5, Lesser Earth Orb x8, and 3000 gil. 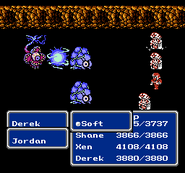