Stilva has two Enemy Skills the player can learn when facing it on the Gaea's Cliff, making it a worthwhile encounter to seek out, as the player can't learn enemy skills on the Battle Square, and Gaea's Cliff is an unrevisitable location.

It is referred to as "Stillve" in the official artwork.

Stilva uses Jump Attack on the party member with the highest current HP, and the powerful and potentially devastating Magic Breath attack that hits all party members for strong tri-elemental damage (Fire, Ice and Lightning). Stilva has the Enemy Skills Magic Breath and Trine for the player to learn. This is the player's second chance to obtain the missable Enemy Skill Trine, but Stilva will never use the skill normally and must be manipulated to learn it. This enemy can be morphed for the rare Holy Torch.

Stilva can be easily defeated by making it cast Magic Breath on itself. Magic Breath is powerful and can do upwards of 2,000 damage, so surviving it can be difficult. Guarding allies against either Fire, Ice, or Lightning will protect them from an almost certain KO, as well Big Guard. L4 Suicide also works against it, and leaves it open for being morphed. Using Magic Hammer on it makes it unable to use Magic Breath, and replenishes the caster.

Choose All Opponents
Use Magic Breath on Target 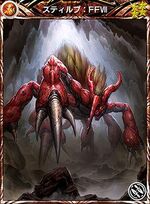 An enemy called Stilva appears in Final Fantasy IX which uses a similar model, albeit with greater detail.