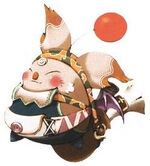 If moogles can remain unaffected by the miasma like monsters, then does that mean that moogles are monsters?

Stiltzkin is searching for an answer behind the Miasma that plagues the world. He questions why moogles can travel in the miasma unharmed like the monsters, and if that means that moogles are monsters. He makes it to Mag Mell, where he discovers the sleeping Carbuncles. As they begin to awake, he starts to find moogles more similar to the Carbuncles than monsters.

He leaves Mag Mell, telling the Tipa Caravanners to say hello to Artemicion for him, as they've known each other since way back (most likely a nod to them both appearing in Final Fantasy IX, but also tying to possible past history from the prequel Final Fantasy Crystal Chronicles: Ring of Fates in which both are also present). When not traveling, he can be found in Port Tipa, where he teaches the party the basics of fighting.

I'm suited to life on the road with no roots to tie me down.

Stiltzkin is the leader of a group of moogles who are trying to secretly help out Yuri and Chelinka, because he is fond of them. Stiltzkin is first found hanging around Villa, the home of Yuri and Chelinka. He has returned to the village after having been gone for two years traveling the world.

Afterwards, he is seen meeting up with a group of moogles in the Valley of Heroes as they are preparing to write hints onto signs which are scattered through out the dungeons. He then begins to teach Yuri the basics of fighting. After this, he is seen in short comical scenes being used as a object to block a door, being knocked over by Latov who tries to open the door, and being boiled up by Meeth.

When Yuri, Chelinka, and Alhanalem return from Mount Vaal he is preparing to leave and says his farewell. When he is asked why he is leaving, he tries to hide the fact that he's going out to continue adding signs in different dungeons to help the party out. In Multi-player Mode, which takes place after Story Mode, Stiltzkin is found returning to Villa.

Your duty, as I see it, little king, has much more to do with faith than fighting.

Stiltzkin visits Padarak and helps King Leo figure out the fate of his father, having had run into King Epitav after the miasma had cleared. He told King Epitav the legend of architek by reciting a old poem to him composed by a Carbuncle.

Stiltzkin travels to the Flying Tower to visit Tonbetty regarding the new Darklord's actions. However, Mira discover the meeting and held both as prisoners. Only the intervention of Craydall saves him.

Welcome back, adventurer. Looking for a quest?

Stiltzkin appears within the town and will have quests for adventures to take. Upon completing the quest, Stiltzkin will reward adventures and sometimes will add a bonus depending on how quick the quest was completed.

Stiltzkin is a traveling moogle. Unlike other moogles, he has white hair, representing his wisdom and age. He offers traveling tips for Layle whenever he's required to travel to a new place. Layle eventually can kill him by tossing him at a monster.

This section about a character in Final Fantasy Crystal Chronicles: The Crystal Bearers is empty or needs to be expanded. You can help the Final Fantasy Wiki by expanding it.
Spoilers end here. 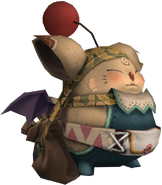