Cid Pollendina: Oh, shut up and help me remodel the Stilshrine of Miriam page!
Please expand this article into a full one. The following tasks need to be completed:

Journey across the Paramina Rift to the Stilshrine of Miriam. There rests the gift he entrusted to the Gran Kiltias of his time. Seek it out. The Sword of Kings... can cut through nethicite.

The Stilshrine of Miriam is a location in the land of Ivalice in Final Fantasy XII. It is a temple located in snowy mountains, housing a powerful artifact. The player needs to equip the Dawn Shard as an accessory onto their party leader to activate the pedestal that opens the rest of the shrine; afterward, they may remove it.

Stilshrine of Miriam is one of the two areas included in the playable demo released in North America a year before the game.

An ancient shrine deep within the Jagd Ramooda. Like Raithwall's tomb, this, too, was constructed in the time of the Galtean Alliance, originally to honor the ancient god of swords and martial might. It is said that a Gran Kiltias of long ago selected the Stilshrine to house the relics of Dynast-King Raithwall, though why he chose this site, and not a temple of his own sect, is unclear.

Stilshrine of Miriam is named after an ancient god of swords and martial might (also referred to as a goddess elsewhere in the game). It was built during the time of the Galtean Alliance, by the Gran Kiltias of that time. The Sword of Kings rests, sealed deep within. No one knows why the Sword was left with the Gran Kiltias and not kept by King Raithwall himself. The pedestal that opens the way deeper into the shrine only responds to those who hold the Dawn Shard.

Stilshrine of Miriam has a design similar to other places built during the Galtean Alliance, like the Sochen Cave Palace. Unlike other buildings from this era though, it is in much better condition, thanks to the effort of the Kiltia. The guardians of the Stilshrine even consist of the walls themselves. The technology to do this has since been lost.

Princess Ashe has decided to fight the Empire, but with no nethicite to use for a weapon after the Dawn Shard lost its power, the outlook looks grim. The Gran Kiltias Anastasis on Mt Bur-Omisace tells Ashe of the Sword of Kings resting deep inside the Stilshrine of Miriam; a sword, that can cut through nethicite, to destroy the Empire's most powerful of weapons.

The party venture inside the shrine and eventually come across the sword. Balthier urges Ashe to test the sword on the Dawn Shard to see if it really works. Ashe hesitates and sees the ghostly vision of Lord Rasler, shaking his head at her. She still picks up the sword and raises it to the stone, but on purpose misses the mark. Fran says the stone fears the sword, and Ashe says she is positive this sword is the real Sword of Kings.

The Stilshrine of Miriam is located in a territory near the Paramina Rift. Flying there is normally impossible, because the area is a jagd.

In the original version, with the Diamond Armlet equipped, the common item treasure is a Knot of Rust and the rare treasure is an Elixir. Most treasures are found in the Walk of Reason area. The treasure in the northeast can contain Steel Poleyns, and the treasure slightly south from there can have the Lamia's Tiara. There is a group of four treasures in the southeast corner, and one of them can have the Pirate Hat. Among the treasures on the other side of the map, in the northwest, the player may find the Firefly and Sorcerer's Hat.

The treasure in the east end of the Ward of Velitation is always either an Elixir or a Megalixir when Diamond Armlet is not equipped, but with Diamond Armlet the treasure is always Megalixir. The treasure will not respawn. The Ward of the Sword-King area has a hidden passage on the left of the hallway; skirting the wall in a way the camera attempts to go "inside" the wall reveals a new path. At the end of the path is a treasure that never respawns that has either a Dark Matter or a Shell Shield. With the Diamond Armlet equipped the treasure is 90% Shell Shield, 10% Dark Matter. When entering the last room after the hidden passage the player should cast Float before entering, because the entrance is covered in traps.

In the Zodiac versions, the treasures are different. Walk of Sky has some accessories, and Walk of Mind has an Ice Shield, which may be of use for the boss of this dungeon. The Ward of Velitation area has the Countdown spell. The hidden passage still has the Shell Shield, now as a guaranteed treasure. Walk of Prescience has the Ruby Ring, that bestows constant Reflect status to the wearer.

To find Myath, the player must have spoken to the "Huntmaster" in Phon Coast and defeated Thalassinon, which will trigger the start of the Rare Game quest. Myath then appears in the Stilshrine of Miriam in the area Ward of Velitation. To get this creature to spawn, the player must kill the three Dragon Aevises in the room, leave and return, and it will be in the center of the room. Like all trophy game, once it is killed, it will never reappear.

To find the Rare Game Matriarch Bomb, as well as the enemy Oiling, the player needs to locate the hidden passage in Ward of the Sword-King. The player should head south to where Darkmare stands in waiting. The western wall here is where the hidden passage is located. When the player stands in front of the western wall for a few seconds, the wall will vanish and reveal a hidden stairway leading up. The player can try to move the game camera inside the wall to reveal it. The player should cast Float on the party, as the last hidden area has a trap that immediately applies berserk and confuse and is otherwise impossible to avoid.

The Matriarch Bomb has a 20% chance to spawn in the final area, along with a one time only treasure that can contain either a Dark Matter or a Shell Shield.

By correctly setting up the party's gambits, it is possible to create an infinite loop, which allows the game to be left playing while the party continues to gain experience. Leaving the game for a long period of time, for example overnight, allows the party to gain several levels with only minor initial effort.

There are two important things to avoid, both of which have the effect of ending the loop. The first is killing Negalmuur. To this end, gambits should be set up so as to ensure that only the summoned enemies are attacked, for example, using a gambit such as "Foe:HP<3,000", since Negalmuur's HP is far in excess of that. The second thing is to prevent the party leader remaining KOed for long enough that the game is paused to select a new leader. The appropriate healing gambits should be set up to avoid the party leader's death, and Decoy used to attract as many attacks as possible to other members.

One early method for near infinite auto-leveling is to teleport back to Rabanastre and buy the gambit for Foe: HP <2000 (also the < 3000 gambit, if the party doesn't already have it), plus Bone Mail. It's also good to grab a Flame Shield to farm some Oilings while waiting for the 30 min Negalmuur spawn time to pass.

Party leader gambits in order of priority top to bottom:

Using Remedies to remove Doom status is not so workable as the earliest the Self: Status = Doom gambit is available is Balfonheim. The Ally: Status = Doom gambit would probably end up using too many Remedies. This is why this method is described as "near" infinite; there is still the small chance the party leader might get doomed.

Number (2) on the list should have higher priority than (3), as the aim is for turnover: the faster the Ghasts are killed, the faster Negalmuur spawns more, and the fewer Ghasts there are simultaneously present hitting the party. One wants to avoid having Negalmuur + four Ghasts with part-health spawned and to be stuck on raising, healing and buffing because of being under constant attack, also increasing the likelihood of the party leader ending up doomed.

The party should be equipped with weapons with stable damage instead weapons with high but unstable damage to get the Ghasts' health below 2000 on the first hit from the secondary characters. Alternatively, one could use the Foe: HP < 3000 gambit instead, but then the chances of stealing are reduced.

Secondary character gambits in order of priority top to bottom:

Both subs should have Decoy as it reduces the likelihood of the party leader becoming a target should one of the subs die and have to be raised. It helps to have the licenses for extended status effect time (to limit Haste, Decoy recasting) and to gain MP from dealing or taking damage. Finally, having Thief's Cuffs equipped increases the chance of a Paramina Crossbow steal.

The above early method is not fool-proof, as the tank will occasionally be doomed.

Later methods available are to either equip the party leader with a Ribbon to prevent Doom status, or otherwise gaining the Self: Status = Doom gambit, a stack of Remedies, and the license that allows Remedies to heal Doom. The latter Remedy method would only last as long as the Remedies do, while the former Ribbon method would mean the party leader would be stealing without having Thief's Cuffs equipped.

The map can be found behind the ancient door leading to the statue in the Ward of Steel after defeating Vinuskar.

"The Stilshrine of Miriam" (ミリアム遺跡, Miriamu Iseki?) is the location theme. It is a mysterious, ambient track. 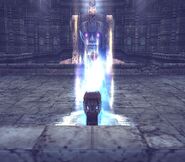 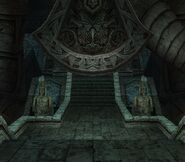 Statue on a pedestal.

Miriam is the name of the sister of both Moses and Aaron as told in the Book of Exodus in Hebrew Bible. She is in fact, a prophetess and the older sibling of them.